Testament are one of the first thrash metal bands to emerge from the San Francisco Bay Area in the 1980s. Originally formed as ‘Legacy’ in 1983 by founding members Eric Peterson (rhythm guitar), Derrick Ramirez (guitar) and Louie Clemente (drums), the line-up included vocalist Steve Souza and Greg Christian (bass).
To date they have 9 Studio albums.
Vote for best Testament albums!
The Top Ten
1 The New Order 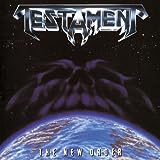 Hard to choose between this one and The Legacy, but I like this one even more! But both are killer Thrashhh!

An absolute classic, although I think it should be a tad bit lower. Maybe #3 for me.

Solid and the best album!

How is this so high up? This album is seriously overrated; I honestly can't believe how people are blasting Low and The Gathering for being overrated when so many Testament fans make it look as if their early albums are the only ones to exist. Seriously, it's a completely fine album, but its only hinting at the mastery of Testament's later albums. Probably near the bottom for me (nevertheless, it's still quite good).

I vote this 'cause of OVER THE WALL. Such a lame reason for selecting the best album huh? But that solo is way to decisive to this extent...

One of the best thrash metal debuts. Pure, raw energy is displayed on this album. Alex Scolnick (guitarist) was only 18 when this album was released. Very impressive guitar work for such a young age.

"The legacy" album,and their first, has the most impressive guitar riffs that testament has and ever will play.
It has also impressive melodic guitar lines and totally inspired music. It is simply their best.

3 Practice What You Preach

Many great albums need some time to warm up to. But not this one. The first riff of the first song immediately puts smile on my face, exactly my type of thrash. Definitely my top 5 favorite metal album of all times.

Slightly over-praised, but it's honestly a perfect album nonetheless. A classic, and just outside Testament's top five.

Wow the top 5 albums are all phenomenal. The voting is very competitive too, only 0-1% difference between albums.

It deserves to be number 1! it's one of my favourite albums of all time!

Man, talk about a late career highlight! Definitely a fun album to listen to, despite not being as monumental as some of their other works.

Both Gathering and this are amazing, together with the remastered best tracks from first two classic albums, I.E. first Strike Is Deadly (wonder / still waiting (:) whether Metallica is capable to do the same thing, I.E. merge best RtL tracks together with MoP in its entirety).

Best song: A Day In The Death - great harmonies, thanks Alex si back since Formation. (by the way Hoglan sessions together with all the other equally gifted musicians belong easily among best albums anyway (ITP, Symbolic, this album).

I have been a fan of Testament since 1989 and Practice What You Preach was always my favorite. I think Dark Roots Of Earth might edge into first place now. Having said that, I think every album by Testament is great. This band can switch it up and still keep their core sound. I love that they stayed the coarse all these years.

This is one great album. The reason I'm voting this one above some other great albums of theirs is the production quality because musically their all just brilliant. Another thing in this era of not so metal music an album like this is relief.

One of the greatest albums ever made, regardless of genre. All killer, no filler (and an awesome lineup too)! This is Testament at the unprecedented peak of their powers, as they finally combined the death and thrash aesthetics of past albums together in a perfect blend of ultimate HEAVINESS. This is, quite truly, the aural equivalent of a brutal SMACKDOWN!

Testament's best album ever without question. All the songs are absolutely amazing, and the musicianship is some of the best ever. Call it "overrated," but it damn sure blows The Legacy and any of their other work out of the water. #1, without question; anyone who disagrees, that's fine. Just quit calling it "overrated," because all you who say that and yet constantly praise The Legacy or Practice What You Preach for being their best work are sort of contradicting yourselves. I'm sorry, but it's sorta true!

Just like low this album does not deserve to be this high up, though it is better than low. Like low it is a boring album, with some good songs like DNR and True Believer. Though this album is so overrated and not even that good. Like low, a alright album that gets praised way too often.

A pummeling thrash/death affair with hints of black metal and an incredible lineup, this one of a kind Testament album reigns as the best.

6 Brotherhood of the Snake

Has a very 80's thrash sound. Reminds me strongly of PwyP. I'd put it:
1. The Legacy (I'm sorry, but it has the edge over:
2. The New Order
3. Practice What You Preach
4. Brotherhood of the Snake
5. Dark Roots of the Earth
Honestly, I don't care about the rest.

Pretty solid record. Not a favorite of mine, and it has a lot of recycled riffs, but it's overall a completely fine record.

7 The Formation of Damnation

Yeah, all of Testament albums are good, but to bring Bay Area Thrash into the 21st century with 'The Formation of Damnation' is one hell of a feat. To hear an album this well produced and played is a pleasure. Exodus re-recorded 'Bonded by Blood', Flotsam and Jetsam re-recorded 'No Place for Disgrace', but there's no need to with Testament. Actually, re-recording 'The Legacy' would probably sound incredible. These guys haven't lost an ounce of hunger. Now, if we could just get Mustaine and co. To re-record 'Killing is my Business...' And, no, James and Lars and co. Leave your back catalogue alone. We own it now.

An absolute masterpiece, and definitely deserving of being in the Top Five. Also, Paul Bostaph RULES!

I'm voting for this not beause is their best, but because no. 8 is ridiculous, it should be at least in the top 5

Paul Bostaph. Nothing else needs to be said!

When Testament fans are calling an album like this "overrated," they're probably not into death metal, are salty about Alex Skolnick leaving for a brief period of time (mega salt), and praise The Legacy as the greatest thing ever to be conceived (it's not). Lol it's almost like the Exodus fans who ONLY like Bonded by Blood and claim that later releases (I.e. "Fabulous Disaster," "Tempo of the Damned") are "overrated" in comparison to it because they can't handle any album without Baloff. Stupidity I say!

Atrociously underrated, and definitely a Top 5 Testament record. Honestly, this is the record that proved to all the naysayers that they were better than Metallica and not a clone of them.

How the hell is this album so high on the list? How ironic that an album called low would start the low point in Testament's career. I mean this isn't a bad album, it's just boring and everyone saying it's amazing is completely wrong. Best testament album from the 90's my ass. I mean the parts that are suppose to sound like death metal on this is pathetic. I mean Slipknot sounds closer to a death metal band than testament does on this album. Not a horrible album just gets way too much praise when there are other Testament albums that deserve it.

How is this album so high on the list? How ironic that an album called low would start the low point of Testament's career. I mean it's not a bad album, it really just boring. I just don't get how everyone is saying that this is an amazing album and there isn't really a single good song off of it. Best Testament album from the 90's my ass. Testament "experimented" with death metal on this record? I mean Slipknot sounds closer to a death metal band than testament does on this album. Not a horrible album, but not a underrated hidden gem at all.

The only meh Testament album. Poor production and relatively forgettable songs sort of bog this record down. Despite this, it's still alright, with some good riffs and soloing.

My third Favourite album from start to finish. I still don't understand why this album never gets the recognition it deserves.

Not the best, but should be in the top 5, the guitar and vocal work is just as good as on the legacy of the new order, maybe even better!

This album should get more recognition. It is brilliant.

Simply deserves to be much higher on the list.

Perhaps not the greatest of Testament albums, but it each song does have a good flow to it.

Can't believe this album is not higher on the list. Return to Serenity, Troubled Dreams, Electric Crown... Such an amazing piece of art.

It's crazy this is so low. It's such a great album and one of my favorite Testament records.

I do not understand the hate for this album at all. Sure, it's not their best, but it's still a masterful album with some pretty amazing songs! This should definitely be WAY higher, maybe like Top 4 or something.

Underrated. Bit not repetitive at all!

12 The Brotherhood of the Snake

One of their best since the '90s. They're all in their fifties and they're STILL showing everyone up!

This is probably my favorite since they rerecorded all the great songs from The Legacy and The New Order and gave them the polished production they need, plus they added rerecords of demo tracks with Steve Souza on vox.

15 Return to the Apocalyptic City