Humoungus Entertainment is one of my all-time favourite video game companies, they used to make children's point and click adventure games back in the 90s and they made excellent video game series like Freddi Fish, Putt-Putt and Pajama Sam that made my childhood, especially the Junior Adventure games. So..., why not make a list about it? With that being said here it is.
The Top Ten
1 Freddi Fish and the Case of The Missing Kelp Seeds

This game isn't just the best HE game ever, it's the best game ever. Nostalgia hits me harder than any other game. Ok, I should calm down. Anyway. This was the first HE game that I actually ever played and it makes it super special for me. Everything about it is legendary. The music, the minigames, the rooms, the items, the story, the sprites EVERYTHING! They are all perfectly drawn and played and the setting is so magical it's unreal! It's the most flawless thing this world has ever seen! Like..., ok..., I do admit that the theater is nothing that interested me in the game. But minigames/side stuff is never mandatory and if they are great it's just bonus points and the rest of these stuff are legends!
From an objective stand-point, this game hasn't aged as well as many other modern HE games, such as you can't use Esc to skip certain cutscenes. But that's honestly the only complaint I have and even then it's not actually a very big problem. Sure it can be annoying not being able to ...more

2 Freddi Fish 3: The Case of the Stolen Conch Shell

While Freddi Fish is considered the weakest HE game series by fans, the one that people consider to be their favourite in the series is the third one. In my opinion it's certainly close to being number #1! It's just that 1 and 4 are slightly better. Anyways, this game was also pure gold! The tropical setting is so awesomne and the endgame was awesomne too! You've got this giant aztec pyramid in water that you have to swim through! I also love the plot-line where you have to go in that cave to look for something! I just love this game! 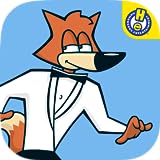 Aside from the Freddi Fish games, the Spy Fox trilogy is definitely my favourite out of HE games. I dunno, their plots and gameplays are just very interesting in my opinion and Spy Fox himself is such a charming character. My favourite of the trilogy is the second installment, "Some Assembly Required". This game is simply just amazing and has so little flaws. The story is incredibly good, I like the amusement park/world's fair setting a lot with its greenery and characters, the villain is the best in the series and the puzzles are just excellent. Ok, yes there are only two different paths in the game but the gameplay rocks either way. The villain is a rare example of a Humongous Entertainment antagonist with not only a serious motivation, but a good one at that. That is Napoleon LeRoach, a french cockroach dressed like Bonaparte who soughts to get revenge on the world for getting treated poorly for being small. Overall this is the best Spy Fox game, and also one of my favourite ...more

4 Freddi Fish 4: The Case of the Hogfish Rustlers of Briny Gulch

So from the #1 item, you might be guessing the Freddi Fish series of HE is my absolute favourite video game series of all time. And that is absolutely correct. There is no other video game series that comes as close as holding that special place in my heart. Quest for Glory and Putt-Putt are close but still not.

I adore all games in the Freddi Fish series and I consider all masterpieces (exception for fifth installment but still awesome). The first one is the only one though, that really has touched my feelings so much they've bled. However..., the fourth game of the series, has actually almost made it there. It's my second favourite Freddi Fish game because of a lot of things. For example the western setting. Might come of as a disappointment for a lot of people but hey I like it. The music and everything wakes up so many feelings. The reason I prefer the first one is not only because it's more nostalgic to me (duh),

5 Freddi Fish 2: The Case of The Haunted Schoolhouse

Aah, I remember when I first found out there was a sequel to Freddi Fish and starting this game up and it was awesome.While this game is the shortest of the series, I don't care too much because of how good it is! I really liked the school setting and the setting outside of it was excellent too! I remember when I first played it and the intro music came in and I was so hyped! I just love this one too much!
However you remember what said about it being the shortest? One of the reasons is because this is the only one in the series that didn't have a proper endgame like the other ones so it was a bit too short, you know like a final setting at the end of the game, like the pirate ship in the first one or the ship in the fourth one. However it's ok because the game wasn't really built around that plot-line. I also liked how this game has big similarities to the first one.

6 Putt-Putt Goes to the Moon

In my opinion this is the greatest Putt-Putt game. Even in my top 5 best Humoungus Entertainment games! I guess why I love it so much is because it has a similar tone to my favourite HE game (the first Freddi Fish game), the setting is pretty dark and I just had the most fun with this one. I wish I played this as a little kid, this, Joins the Parade and Pep's Birthday Suprise I only played as a teenager, but oh well, I love this one the most easly! A great second installment!

Putt-Putt Enter's the Race was the first Putt-Putt I played, and as a little child, so I always used to refer this one as the first one even though it's actually the fifth one. I do think it's just about as good as Goes to the Moon, I mean this game I have so much nostalgia for. But.., objectively I'd say that one is slightly better. Oh well. This game has the same setting as the first game, Cartown and Putt-Putt will join the Cartown Race and he must find all racing equipment. I love this game so much! It's always fun to explore Cartown and it's heavily improved since the first game! Pretty much flawless

It was a hard time deciding between this one and Enters the Race, since both are in my opinion equally as awesome, but I had to go with this one for now below. Many people consider it to be the second weakest of the series, but that's not true in my opinion. In fact this game was in my opinion amazing and better than the one everyone considers to be the best (Saves the Zoo). This was the last Putt-Putt game that I consider to be a good game. I can't believe it's the sixth installment and yet it's so good! The circus setting was pretty cool even though I normally dislike circuses and the gameplay was just so good! The puzzles were decent and fun, and the endgame where you can jump on trampolines was really fun.

10 Freddi Fish 5: The Case of the Creature of Coral Cove

This was the last true HE game produced before Atari came and ruined everything. Unlike the other Freddi Fish games in the series I don't consider it to be a masterpiece but rather just amazing. The new graphics while still mostly the same feel kinda more modern and I didn't like that too much and the music was very forgettable. The new side-scrolling method isn't my favourite either. However on the plus side this game has one of the best minigames in the series (Mess Hall Mania) and the story is still pretty awesomne! I loved the endgame too and the setting was pretty good too. However this game was slightly disapointing and I easly consider it to be the weakest Freddi Fish game. But it's still so great.

I got this game this christmas (2019) and I've been very eager to test it out and it didn't disappoint me. I knew it wouldn't hold up to Spy Fox 2 but it was better than the first installment. This game probably had the most original story of the bunch and most original villain as well. Poodles Galore, a fashion enthusiast is planning on depleting the world's ozone layer and use it to create a special type of sunscreen that can withstand the sun's rays and become rich. She is the most evil HE villain from what I've seen and came the closest to actually killing someone and causing a mass extinction. Unfortunately I'm not a fan of her because her voice..., ugh. So loud and annoying. But she's decent overall. One thing I like about the game is how you can travel to different parts of the world and all of them are necessary to go to. There's north american streets, south american jungles, african deserts and an asian lake. It's a nice addition in my opinion. I think the puzzles were ...more