Worst Fighting Games of All Time

I have no idea how they did it, but somehow they took the already stupid idea of this game and made it dumber. At best, this is just Street Fighter with a basketball player shoved into it. At worst, it's utterly baffling with the choices they make in the story and character department, including giving the Rainbow of Doom a story in which it's a sugar-coated graffiti who then dumped in the garbage (yes, seriously). I'm pretty sure the facial expressions in this are designed to be the most unsettling things ever. The characters are none of the charm or effort. There's a stupid boss. There's no logic to how the game's world works. I'm pretty sure I've gone insane from how bad this game was.

A website was created to persuade people to find copies if this game just to destroy them. If that's not evidence of how bad this game is then I don't know what is.

Shaquille O'Neal in a fighting game? Can anybody say Rainbow Of Doom!

A fighting game with a basketball player?

I don't think you could find something more dead on arrival than this. I know that several prominent gamers, including a few of my inspirations having taken a swing at this one and I really wouldn't be adding much except beating a dead ninja (or Gyaku, as is the case) but it feels like it shouldn't exist. The graphics are awful-looking, most of the special moves come out of nowhere and range from mediocre to horrendous, and most of the characters are either idiots or annoying. Look, even if you have the Jaguar, there are worse things you can show to it, but even if you win or lose, it's at least something practical.

This game spend forever in development and was suppose to be the game that would save what was left of the Atari Jaguar instead it became the tired story of a bunch of idiots fighting hell.

There is a reason fighting games were never meant to work on the game boy, there's barley enough moves the graphics are horrible and there is only one song for the entire game.

This is one of the most boring games I've ever played. They're trying to make puns during the battle. What do they have to say about it? It's always the same and people who have no relevance to the story don't get to share in the main character's stories. Speaking of which, our leads shallow or a jealous jerk-off. Also, these people may be trapped in some strange time loop because... fighting. The AI is cheap, and a large shot of jokes are described while happening off screen. Also, the plot was done better in the director's cut (a cheapquel)

Same people that made Bubsy.

This game sure is balls...

Stupidest Idea ever should go to hell >.<

Another crappy rip-off of Mortal Kombat.

Shaky Jake, Fox, High Abbot, This Characters are Horrible. and the Game, too 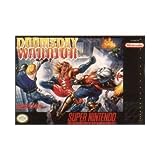 It's just a lame ripoff of the absolutely amazing Super Smash Bros Brawl.