For all of those rhcp fans out there + his solo work fans like me... This is for you guys!
The Top Ten
1 The Empyrean 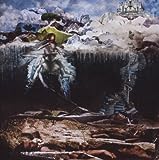 Sadly his last guitar-driven album, The Empyrean to me captures Frusciante at his absolute peak. Every song is composed intricately and yet focused music-wise, and John manages to create such strong and vibrant moods that his lyrics on this album, though cryptic and often infused with high-brow metaphysical themes, are nothing short of visionary. I am usually a sucker for quotations -- with The Empyrean, quoting lyrics proves tricky: Taken out of context, they might seem weird or even hokey at times, but within the context of the songs, they are among the most beautiful and touching pieces of writing I've come across in recent years. The Empyrean is definitely Frusciante's best and most accomplished album, hands down.

While Curtains and Niandra are both close seconds for me, Empyrean is an expansive aural experience that defines the idea of a story-less concept album. Musically astounding, Frusciante wows with musical and lyrical prowess, as well as composition as of yet unmatched by any of his other works.

The album that got me into JF. Every track is incredible, I'm not convinced anyone else can write music like John can, and this album is the reason I believe that.

Has really nice songs that make you feel like you're in a different universe! So innovative and artistic.

Very dark, he was high out of his mind when he made this obviously. This was the album that introduced me to John's solo music... There is just something about his artistic expression in the songs from this album that sticks to you even though some of the singing is kind of eccentric.

He saje that he did this album before his drug addiction while still touring with rhcp and that just shows through what he must've gone at that time.

3 The Will to Death

A very chill album still capturing his guitar skills, certainly less electronic. A very pleasant listen for the longest time. The most RCHP-ish, I think. Almost at level with "Inside of Emptiness".

This album has had a profound on my outlook on life, living and dying. Frusciante's mind and time bending lyrics remind me of poems from American writer and poet Khalil Gibran, and they are accompanied by rich warm sounds and guitar solos masterfully crafted for reverse looping (Time Goes Back), a combination that creates a place that is time-less, leaving nothing but love and hope. Reverence.

When someone you love passes away or you are having an existential crisis, I direct you to Shadows Collide With People for comfort. One of many Frusciante albums I will have my children and my children's children grow up listening to.

I am the wrong person to write this album the review it deserves, because my English is far from perfect. Let's just say, that this album sticks with me since my teenager years. I can listen to it when I feel good, but even more when I feel down. It is highly emotional (like most of Frusciantes work) yet full of hope. I deeply love this album and to me it's the most underrated album I know. Partly cause most of my favourite albums reveived good or great ratings and partly cause it is one of my favourite albums of all time. To me, this emotional rollercoaster of an album is the best one Frusciante made.

Has more electro than guitar and has some nice songs like Song to Sing When I'm Lonely and Omission.

John is imho in his best only with guitar...maybe I'll someday understand and feel the newest albums

This album deserves its place amongst the greatest acoustic albums of all time.

"It was just me sitting on a pillow, on my living room floor, with my back leaning against the couch."... awesome acoustic album. Meaningful and emotionally in parallel with every song. This is amazingly expressive and underrated

6 To Record Only Water for Ten Days

A brilliant mix of his electronic music ability and guitar skills.

Unique in its own way

A very commendable set of tunes! Instrumentals are definitely great and his music directly expresses an effective objectification of 'eeriness'. Nice interpretation of emotion through guitars and lyrics.

8 A Sphere in the Heart of Silence

A beautiful experimental album that shows off the pure musical talents of John Frusciante and Josh Klinghoffer.

9 Smile from the Streets You Hold

A balance of trance-like music and meaningfulness. Great guitars and considering it only has four songs... it's a nice listen to identify John's music style.

13 From the Sounds Inside
14 Foregrow

Only an EP, but I love it from front to back.