The Top Ten
1 The Book Of Souls - Iron Maiden 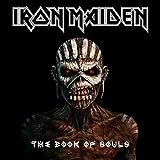 Bruce Dickinson had throat cancer during the recording of this album and the vocals are out of this world and this is a 40 year band and these guys are in there late 50's and early 60's and still bringing out Epics and Fantastic Material. Up The Irons!

Kicks more ass than all of these combined one of their best album. And I guess beyound the red mirror is amazing too hell yeah

Should be 1 no doubt

2 Beyond the Red Mirror - Blind Guardian

This album is gorgeous. Anybody who sees this list should take the time to listen to this album, it is a gift sent by the gods.

Great, it should be number 2, definitely better than that Ghost album, Ghost sucks!

One of the most generic music I've ever heard, with too many rip offs.

This list was made before most of these albums ever came out.

I love MM, but this album isn't metal. It's alternative/blues rock.

Best death metal album of the year, and my favorite cattle decap album next to monolith of inhumanity. Great album! Worth a listen

The best extreme metal album of this year.

Favorite album ever, worth the listen

Repentless SUCKED, like any other Slayer album after Seasons.

Even though its not as good as Red Mirror or Book of Souls its still amazing. Disturbed is back!

12 What Should Not Be Unearthed - Nile

LOG's third best album! Listen to this album and you'll know its just as good as ashes of the wake or sacrament.

Very consistent record with references to previous albums. To Hell and Back is the best metal song of the year and my new favourite Symphony X song.

One of symphony x's best album. You've got to listen to this if you like blind guardian.

This album really impressed me. Leviathan was just a blip on the radar to me until this came out

This should be higher. Tesseract is a very underrated prog band

Metallica didn't released an album in 2015.

25 Venom - Bullet for My Valentine

Just listen to Broken, Raising Hell, Army of Noise, No Way Out and vote this album.

Listen to No Way Out.
Also, who added Human by Three Days Grace? Not metal