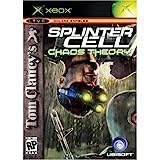 Splinter Cell Chaos Theory is the best splinter cell game in the series based on my experience.. It just gives you a lot of options, routes, and styles in completing a mission. Missions are also well made. The maps are great and the story is really engaging. This is also the only game in the series that makes the player "feel" like he is Sam Fisher than controlling him as all the things you do (picking locks, hacking devices, avoiding light, reducing noise, etc) are all manual and needs some attention. The other games are all simplified in my opinion as you don't do much of "manual" stuff to do like hacking, picking locks, etc. In Blackist, the hacking is as simple as holding a button lol what a noob,. Blacklist is my second but nothing beats Chaos Theory. It's all about the gameplay not the graphics.

The story is engaging, politically thrilling and slowly evolves in terms of tension and stakes. The topic of Information Warfare becomes more and more important these days and is interesting in itself.

The missions are hard, especially if you do not want to leave a trace that you were here, the game let's you choose you method of play most of the time (except for some, very realistic, non-lethal (LTL) mandates).

The game gives you a tactical freedom and a fair share of sandbox style maps/levels/missions in combination with an engaging story and content that let's you completely dive into this living and breathing world.

Together with the amazing Coop Campaign (6 missions) and the unique "Versus" (Spies vs. Mercs) multiplayer mode Splinter Cell Chaos Theory is the best Splinter Cell game to date and one of the best Stealth games I ever played.

Thank you for this unique experience (to the developers).

This is the best SC game ever. Dynamic environments with an interesting story. Tense task management combined with an immersive world. Trying to stop enemies that can kill your character in about 3 seconds. With the greatest enemy being the fight against your own flaws and inability to play the game. It's just amazing. Great controls and great gameplay. I could go on, but really, what more needs to be said about this great game?

Only in this game of the series Sam is a weapon precise as a scalpel. Control (on PC) was truly amazing. It was a perfection hardly ever touched in game industry. Blacklist and Conviction Sam is just a cool looking guy in cool looking environment. Move chaotically, leg is randomly stretching from open door, not reaching near by objects (or wrong one), seen at shadow but not seen in the light etc.

The best splinter cell game in the series with incredibly difficult levels especially on perfectionist difficulty. Probably the best stealth game of all time. Only problem is that characters' faces look weird

The best... I've completed it and it is one of the best games I've ever played... I got shocked when people voted chaos theory as no. One... I've also played that but I was disappointed with its graphics..

Blacklist had a great campaign, cool co-op missions and great to see some stealth from the original games and action from Conviction. Overall one of my favorites.

Great balance between stealth from the originals and action from Conviction. Definitely better than Conviction. Vote now!

This is Splinter Cell without the Splinter Cell. Not enough stealth element. It's just a FPS game that is done well. Kudos to that, but not to stealth. I think this is the worst out of the SC franchise, but then it's still good, don't get me wrong.

The emotion Sam shows is incredible. And the fact that he uses his surroundings to interrogate instead of holding a knife to their throat, it's amazing. And his comments are hilarious.

Sam Fischer is awesome, and his combat is really cool.
A very good game.
The best I ever played.

The mark and execute, neat shadow effects, and extremely fun co-op, it's ahead of the pack. Big time.

-ORIGINAL Xbox VERSION-
Made by the authors of SC1 and Chaos Theory, the Xbox/Ps2 version has only superficial resemblance with the Pcs360 version. In this, we have the best level design of the series, with a gameplay that encloses the best features of the previous three games. The story is really engaging, and the moral decision add a bit of roleplaying to the experience. Really, really, really underappreciated.

The Original Xbox version is graphically miles better than PS2/GC/Wii, and it's compatible with the Xbox 360.

Best in series, because you really are double agent... And the choices you make depends story mode have more endings so there is double story... Great to play more times to see all endings and levels are awesome...

This game really deserves to be considered as the best SC game ever made.

Just buy this game and play it to see what I mean.

Splinter Cell Pandora Tomorrow is simply one of the best video games of 00s.

Although Pandora Tomorrow has horrible shadow effects and multiple glitches, it's the third best in the series due to the storyline and overall gameplay besides the many glitches present in-game.

I bought this game when I was 8 and I had no idea how to play it or what stealth means anyway.Then as I grew older,by gods miracle I grew brains and realized what I was missing out.But still can't deny it was best to play when I didn't know anything and instead of sneaking I would blast everybody's ass up.

The game that introduced me to my favorite game series: Splinter cell. The best game I ever played.

Recently replayed this one and I loved it. It may have aged a bit but it's honestly still very fun to play. It also has the most memorable alert theme.

The best game is always the first! And I think it has the greatest story. Pandora tomorrow is also really good, and chaos theory is awesome!

Splinter Cell original is second best because Chaos Theory defeats it by a million, but it's good.

Bad graphics. Bad story. Bad gameplay. And probably one of the most boring games out there

Never waste your time playing this.

It's the worst because so many parts can't be played.