The Top Ten
1 The Joshua Tree 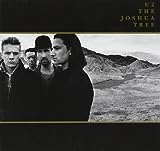 This album has 7 legends, 3 greats, and one bad. Unforgettable Fire has 7 legends, and 3 greats. But over all, I have to give it to Joshua Tree. Here's both ranked:
1: One Tree Hill/The Unforgettable Fire
2: Red Hill Mining Town/A Sort Of Homecoming
3: Bullet The Blue Sky/Pride (In The Name Of Love)
4: Where The Streets Have No Name/Bad
5: But I Still Haven't Found What I'm Looking For/Indian Summer Sky
6: With Or Without You / Wire
7: Exit / 4th of July

Those are the greats,
And don't forget the only bad song of both albums! Mothers of the Disappeared

Both albums shine as some of the best of all time, but Joshua Tree wins it. Achtung Baby, All You Can't Leave Behind, and Under A Blood Red Sky are good too.

Totally amazing and heartfelt, from Where the Streets Have No Name to Mothers of the Disappeared The Joshua Tree is deserving of being considered one of the greatest albums of all time. U2 came quite close to this multiple times afterwards (even with Achtung Baby and All That You Can't Leave Behind) but they never completely topped this piece of perfection.

I personally would vote for Joshua Tree over Achtung Baby any day of the week, because it's WAY easier to listen to from start to finish. 0 Bad songs.
Great albums they both are, but this really is their best.

This this the quintesential U2 album. One of the best albums to come out of the eighties when almost everything else was mediocre at best. When I think of U2 this is the album that stands out for me. Other albums came close but this is their best work

I'm sorry but not even close to perfection until Achtung Baby... all prior works are great but this was his/the bands best effort of all times... I work for the band from 1987 till 1998 and this was the most complete album start to finish they though they had done since the start. I enjoy all their work and hope they top it one more time. RCM 64

Achtung Baby has got to be my favourite U2 album of all time? Why? the tracks and the sound. So many good hits found in this album which makes it addictive to listen.

I have love for all their albums and it's hard to pick between JT and this, but pick I must. It just never gets old and still sounds new 20 years later!

With no doubt the best album of U2. The sound, the songs, U2 on his best. Please listen to the whole album. It tells a story.

Every song is so perfect. Will always be my favorite by them. "Elvis Presley And America" is not the worst U2 song by faaar. That would have to be "The Refugee" off of War. There is just something not right about that song, as if it was not written for them to play. But back to the masterpiece that is, The Unforgettable Fire, the three best tracks is an extremely difficult thing to choose but if I could I would just say the whole album, but I won't so Ill say the three best songs are: "The Unforgettable Fire", "Promenade" and probably my favorite U2 song along with "Ultraviolet (Light My Way)" and "Red Hill Mining Town" is "Elvis Presley And America". If you have never heard this album you have to, U2 fan or not. It is their absolute masterpiece. Not a bad track

The Unforgettable Fire, A Sort Of Homecoming, Bad, Pride (In The Name Of Love), Indian Summer Sky, Promenade, and Wire are eight of U2's best songs. 4th of July and Mlk has such a great feel to them, even though they're so simple, and although Elvis Presley In America isn't their best and goes on a bit long, but it doesn't suck. It's just a really great album.

U2 in their best suit. It's got that weird feel to it where you know you like what you're hearing but you're not quite sure what you're hearing... But this has undoubtedly got U2's best songs on it. Pride, Wire, A Sort of Homecoming, The Unforgettable Fire, MLK, Bad, and Indian Summer Sky are the best.

4 All That You Can't Leave Behind

Showed everyone that U2 was still one of the best bands in the world after the disasters that were Zooropa and Pop. "Beautiful Day" and "Walk On" have some of the best and deepest lyrics the band ever composed and "Elevation" is catchy as hell. Then after 9/11 this album took on a whole new meaning, Bono walking out to the Super Bowl halftime show a few months after that singing "Beautiful Day" with the tribute to all the people killed projected behind him is an unforgettable moment.

I love this album because each and everyone of the songs are so calming and peaceful. In beautiful day bono's singing is just incredible.

The best U2 album since Achtung Baby. The band may never release an album as perfect as this one ever again.

Great album. Every song fits the overall theme of Ireland being divided. However, many of the songs could have more than one meaning. It just depends on how you want to interpret the song. This album had a musical freshness to it that they never duplicated, but they have had several high quality albums since then. The Joshua Tree is a great album and much more polished, but I think in many ways this album is their best.

Best album of theirs in my opinion, anything before The Joshua Tree are my favorites, sort of fell off the bandwagon with that album, but War is an amazing album which you should listen to... I just wish Bono would've never became the United Nations, he was good back then, but yeah, check this album out

A beautiful album. A document to pure, idealistic, black-and-white, right-and-wrong anger. Impossible to listen to this as an 18-22 year old idealist and not be pulled in by it. "Like A Song...", despite the boring title, is one of their most overlooked and underrated compositions.

This album is boss. It rocks from start to finish with an edgy punk sound and strong political themes. Come on, let's get it up there!

6 How to Dismantle an Atomic Bomb

People don't call it a comeback but it was:

I grew up listening to this but everyone knocks it for being the end of classic U2. Miracle Drug, Original of the Species, and Crumbs From Your Table got out shined by Vertigo and Sometimes You Can't Make it. The B-Side, Fast cars, is really good also

There isn't a single song in this album that I don't like, This should definitely be number 1! Or at least no.2 with the Joshua tree at number 1!

Awesome album, all songs are good!

7 No Line On The Horizon

This album really is underrated. If you took out Get On Your Boots and Stand Up Comedy it might be considered one of their best. Songs Of Innocence is pretty damn good too!

Lyrically some of the best pieces ever by Bono and the boys!

Criminally underrated, I ask of you to listen to this one again

This isn't my favorite but it should be higher. The first 3 are spot on but this should have at least 6

This should be Number 1!

So underrated. This roots exploration album is pure energy and passion. Desire, Love rescue me, Angel of Harlem, All I want is you. Not merely a great U2 album, but a classic rock album.

This is a good number two right under Joshua tree. It has just great energy an should be well over all that you can and unforgettable fire.

My personal favourite. It is so weird but really good, literally ear-pleasure. The tone is also not aggressive. The compositions also unpredictable. Lemon is my favourite..but the whole album is really good!

At first you'll dislike it because it's not what you expected. As you listen to it over the years that will be precisely why you will fall in love with it.

The most experimental U2 album, with mind blowing songs, like tracks 1-10!

There most bizarre album

Second best I can't believe how underrated is this.

My favorite u2 album

This album is a little known treasure which was rushed by U2, adding a sense of incompleteness to this album. This album showed how far U2 would go out of their comfort zone to create new great music. If only it wasn't rushed and was the way U2 would've liked it...

Masterwork or at least it will be seen that way in the future. Even the band themselves are still struggling -- why? Because there is so much there

My personal favourite. This album definitely is U2's hidden gem, and I wouldn't be suprised if later reviews give this album a positive rating

My personal favourite, it's brilliant. So underrated.

This may not be the best (that award will go to The Joshua tree but it is a great album. It is different from the usual U2. The album has energy and life in it which is apparent from the first song "The miracle". Some of my favourite tracks are - " The miracle ", The Troubles, Iris and Song for someone

This U2 Album is definitely a top ten worthy album. Some of the best songs in this album are; The Miracle (of Joey Ramone), The Troubles, Sleep like a baby tonight, California (There is no end to love), and Every Breaking Wave.

Because of the fact that it is back to basics! I felt taken back to my teen years when I listened to it the first time! Great composition and interpretation.

I think this is the most underrated U2 album. Most of the songs are pretty good, however to me the album felt cheap at first because iTunes gave it to me for free

Great for casual U2 peeps like myself. Liked U2 since 1983 but other genres got my most of my attention.

This is a really good album. People just don't pay attention to it because Songs of Innocence was just ok. This should at LEAST be in the top 10, if not top 5.

Listening to this album is listening to what Bono would've said if he died; astonishing.

23 Under a Blood Red Sky