Picked up this puppy for the playstation 2 back in 2006 and I sure as hell didn't regret it. The song choice was astounding with great hits like "One" and "Mississippi Queen". Of all Guitar Hero games, this one takes the cake all the way home.

Ever since I got this game could never stop playing! I find I always come back to this one I just love it! It has always been my favorite and I agree with this list! Except for gh 2 so close to the bottom!

This game has the best soundtrack in all of the guitar hero games. I have a lot of guitar hero games, but this one is the most fun to play. The career mode is the best, because it is so satisfying when you beat lou and get to plaY ttfatf. so great

If you don't vote this one the best you've obviously never played it before because this is the best one I've played and everyone that I play with agrees... Loving the coop career

This is the best on because it's the heaviest. I wish they kept Angel of death in it instead of war ensemble but whatever. I just wish that it was more about Thrash metal and heavy metal and included bands like Megadeth and more slayer and anthrax and judas priest even though there not Thrash and Iron maiden.

This should be Number One, because it features the greatest band in the world and has a great selection of songs from other bands that Metallica like, unlike in the others where it is all the makers of the games favourite songs.

This is my favorite game ever man! I read this website that said war ensemble was the hardest song but I can get 5 stars in it but not on dyers eve, fight fire with fire, frantic and mercyful fate.

Best variety of songs by far! I agree with another comment about how the better player you are, the more fun this game is. It provides not only fun, challenging songs, but ridiculously intense songs that keep the most experienced players coming back and retrying stuff. Interesting incorporation of "quest mode" as well, was good to see a change in the typical career mode everyone expected.

This has to be the most underrated guitar hero game of all time because it features so many good songs like sudden death and bohemian rhapsody, plus the storyline is really cool because you can transform characters and you have to release the demigod of Rock, the boss fight in my opinion is better than the "bosses" in guitar hero 3, I only have both games but those are probably the best.

This list is screwed up! It totally should be...

I love this game... OK so I am a professional and featured
Player of rock band and guitar hero and I have played all of
Them... And the best band and guitar game is... "Guitar Hero Warriors Of Rock".

Guitar Hero World Tour has amazing songs like On The Road Again, Crazy Train, No Sleep Till Brooklyn, and Sweet Home Alabama etc.

Yes this game was a very good one my favorite about this game is the selection of tool songs and the stage that you play the songs on. 8/10 FoxHunter9197

Has some of the best song choices out of the series. Rebel Yell and The Middle are two of my favorites.

This guitar hero game has the best online server its much better than The others. You need to make a World Tour part 2! PS4 oh yes 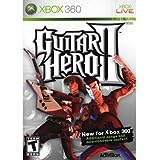 When Guitar Hero 2 came out, the franchise reached it's peak. The first 2 games are the best closely followed by Guitar Hero 5. What makes this game great is it's perfection of gameplay.

Legends of Rock (I) is the WORST Guitar Hero game ever made. The only thing that makes it good is the inclusion of Holiday in Cambodia and Story of My Life. But they messed hip the with glitchy audio, mismatched notes with audio and poop.

Guitar Hero 2 is purely amazing. This has the second widest range of songs, and the highest completion-ist qualities. This has some of the easiest songs for beginners, and THE hardest song in Guitar Hero history to even BEAT "Jordan" by Buckethead... This and Warriors of Rock are by far the greatest additions to the collection with World Tour right behind them.

Guitar Hero 2 Is one of the games that started my life, I feel like this game should be at number 2. This Game gives me a complete challenge and it holds the hardest song in the franchise "Jordan" By Buckethead. Hammer ons were a little bit better than guitar hero 1 but it is still hard to hammer on. I play guitar hero 2 more than I play guitar hero 3

This game was my first, and is probably what got me gaming. It is easily the best, because it added encores, practice mode, and the BEST soundtrack! Seriously, the gameplay is impeccable and this is one of the best games ever.

The track list here is phenomenal, greatest game in my opinion. The addition of letting you make your own tracks creates infinite possibilities for tracks as well. Love it

This is my favorite Guitar Hero game.
It has good songs, the gameplay is awesome and you can create your own avatar wich is awesome.

Create your own superstar is cool. You can play as a made up charctereverything is cool

Some of the good songs on this game are missing. I believe the Cowboys Of Hell song on this version is live but I prefer it to be back to the original version. Stop! Also does not need that speech at the beginning. Also it should've added 18 and life, Bang your head metal health, I ran (So far away), Balls to the Wall, Dead!, She sells Sanctuary and War Pigs. Also Welcome to the jungle and Sweet child o'mine with a guns n roses guest star. I think it should've added World Tour and Metallica songs as well.

I never played this one but its guitar hero that is what it a good game ps. Metallica is the best guitar hero game ever

Some of the best songs and the best stage performances. it feels like you're really at a concert. Very immersive game play!

One of the best! The song choices are amazing!

Are you kidding me?! Best of them all

It had the best band story with the limited stages

I believe it could of had more Aerosmith songs then it did but it managed to get a hip hop song in it.

This game should've included Same Old Song and Dance, Cryin', Last Child and especially I don't wanna miss a thing. Very populated Aerosmith song. I don't understand why it is not on there. Also, I think some more Aerosmith songs should've been added to Greatest Hits, too.

The best selection of Aerosmith songs! Who is a true fan will love it!

Love this one play it

This game was okay but three bad things: The game is very short, there are no encores on this game and the Hammer ons and pull offs are very glitchy. I mean you have to be very accurate. You can't just slide your finger you have to be precise. Also all the songs are covered by WaveGroup and I would prefer some master recoridngs, like GH2.

The original was awesome, the characters were THE coolest looking, the stages were sick, and the songs were classics, but because it's the first, it does have flaws.

Oh boy the memories I had with this thing! It doesn't need a deep story like GHWOR but yeah the hammer ons WERE bad but the characters design songs everything was amazing this IS my favorite GH game of all time

Great selection of hair metal. A little too easy though.

I love it so much

Guitar Hero: On Tour has received mixed reviews. In general, critics felt the game captured the majority of the elements of the Guitar Hero series, and IGN commented that the note tracks were well done as to provide "a great challenge with a solid difficulty curve".

This is the only version I've played except for the Wii version and it's awesome. I have Guitar Hero (I think it's for the Wii, anyway) and the thing that bothers me is the layout of the guitar keys on it. While watching videos of people playing other versions of Guitar Hero, I noticed that the guitars' keys still had that annoying layout. The buttons being all in a line.. Just seeing that frustrates the hell out of me. In Guitar Hero Live, the guitar is much better - The buttons have 3 on top and 3 on the bottom. That's much better! Now it's so easy and smooth switching from button to button and doing two buttons at the same time!

This is the new generation of guitar hero. I know it's not like the old games, but it is a huge improvement to modern gaming. Some say this game is terrible because there's no bass option or drums and microphone, but if you want all that, play Rock Band. The game is called Guitar Hero! It doesn't need additional band instruments.

Love the live feature keeps the game fresh as new songs are added so that it's not the repetitive grind though I'll play paint it black and when you were young everyday. Only beaten by guitar hero 3

Don't worry about all the pop songs they won't even be on disc. Still, this game looks more realistic and has no bass and drums this time. A fresh new life.

The best one for Ds

Fun for a Ds game