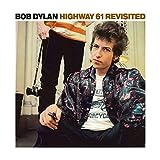 Not a single bad song off the album. BOB & BOTT have some lessers songs but every song on this album has great singing and great lryics. plus, it has too of the best songs of all time, like a rolling stone and desulation row.

Great, classic songs. Ballad of a Thin Man and Desolation Row stand out. The lyrics are brilliant on this one.

2 Blood on the Tracks

This is absolutely stunning. I will never grow tired of this genius. It's not just the quality of the album, it's also so damn epic because his critics were starting to label him washed up and a has-been after a slow start to the 70s, then he comes out and produces this. Also, part of the anger and bitterness in this album, which is so perfect in its sadness, comes from the breakdown in his marriage at the time. His Blood was truley on the tracks.

For me, also, the album that started my Dylan phase. That first side of the album with Tangled, Simple Twist, and Idiot Wind was brilliant.

This is not just by far the best Dylan album, but the greatest and most artistic album ever recorded. A truly a masterpiece of a genius.

The album that started my love of Dylan's music. So many amazing lyrics. Any of his early albums or infidels get votes from me in a top ten

This, in my opinion is one of the greatest albums ever made, I think Dylan has made so many amazing albums, but I think this is his masterpiece.

The ragman draws circles.
Shakespeare's in the alley
Mona tried to tell me
Grandpa does last week
The senator came down here
The preacher looked so baffled
The rain man gave me two cures
Ruthie says "Come see her"
The bricks lay on grand street.

And that's just a tiny part of one of the songs from this epic masterpiece. Bob's best album.
Don't we all, Bob?

I think Dylan is one of the most excellent people involved in music ever, and Blonde on Blonde is his masterpiece. No other album he's can touch this one, and it remains one of my personal favorite albums of all time to this day.

Visions of Johanna, I Want You, Just Like A Woman, Rainy Day Women #12&35. His two best songs are Like a Rolling Stone and Desolation Row, but his best complete album, is Blonde on Blonde

Dylan at his best

5 Bringing it All Back Home

This is Dylan at his best. nobody can touch this album and it is disgusting that it is this low. This album alone had Mr. Tambourine Man, Maggie's Farm, Subterranean Homesick Blues, It's all Over Now Baby Blue, and it's alright ma I'm only dyin. Best album!

Spanish Harlem Incident is off Another Side of Bob Dylan though. This one features Mr Tambourine Man, It's Alright Ma, I'm Only Bleeding, It's All Over Now Baby Blue... should be top 5.

The finest example of 'straight from the heart' song writing and the last of his before he turned to the booze. Every track on this album is good.

"Highway 61" is my favourite but this is only slightly behind, so I thought I would give this the vote to help it a bit.

With "Isis", "One More Cup of Coffee", "Mozambique", "Black Diamond Bay", it is like the revealing of the pain and emptiness in the heart of a world weary, well traveled existentialist. After 3 years in the Peace Corps in Africa, to return to America in 1977 with my mother's death, this Album hit home.

When he's on form, there's no-one to touch him.

Here comes the story of the hurricane...

I think is the best

7 Time Out of Mind

8 The Times They Are A-Changin'

One too many mornings, when the ship comes in, this album is a lyrical masterpiece, influencial across genres, monumental achievement in musicianship. The music is great, but trust me, the lyrics are what keep this record in my player so often

Totally underrated. This is a masterpiece!

There must just be a lack of votes on this list. No way some of these albums should be as low as they are and Infidels, Modern Times, and The Bootleg Vol. 4 are a bit too high. Good albums but not Dylan's best.

In my view his best album (and I have every one). I can return to it again and again, and it still has such mystery, such beauty, such subtlety.

Dylan has been around forever, and let's face the fact he's not always gonna make great albums. However, that doesn't excuse the atrocity of his last few albums, namely Knocked Out Loaded And Down In The Groove. But when he finally decided to sit down and actually write the songs, things went in a very quick upswing. The album offers some great tunes, from "Political World," to "Everything Is Broken," the heartbreaking "Most Of The Time," To the hopeful closer "Shooting Star," it's no wonder it ranks among most peoples fifteen greatest Dylan records of all time.

His crooner voice is actually a VERY good one in my opinion.

The most underrated of Dylan's albums. A work of dazzling emotional complexity.

Always loved this one. I don't understand why it isn't more highly regarded.

14 Another Side of Bob Dylan

A true and early masterpiece! Why isn't this one rated much higher? That's a shame! Putting it behind all of his other albums appears like a bad joke. It belongs in every serious Top 10 Bob Dylan album list!

Worth it for the magnificent lead up to Like A Rolling Stone. Telling all the stuck-in-the-mud folkies where to get off. "Play it ' LOUD" he instructs the band.

Fantastic groove, some great guitar, not every bodies ideology but I still think it's lasted well

The best production I've ever heard on a record. Feels like I'm right there in the bar listening to Dylan and his band play in the corner. I can almost hear the low voices talking around me and glasses clanking, and smell the smokey haze of cigarettes. The subtle playing provides the perfect foundation for some of my favorite songs of Dylan's.

Far, far better than the ultra bland Time Out Of Mind if you only consider the "comeback" records. These tunes have staying power even if they are borrowed and the band is great, if understated. I think his evolving voice fits perfectly with this material.

Great album! He sings well, great band. Especially One more cup of coffee, and Shelter from the storm, best versions of all. I don't care what the critics have said about this album, Vegas or not, still a great album!

24 Christmas in the Heart