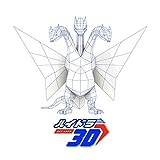 DatAdam started a whole new genre, cyber hip hop, and a new counter movement, cyber hippie-ism with their debut full length album "Hydra 3D". There's a bit of Trap, a bit of electronica, much experimental energy but still enough pop appeal. The lyrics are anti-materialistic, personal or nerdy, all in one bag, and they go together amazingly well. We have three young anime-loving musicians who love what they are doing and on the way want to spread a few nice messages. Sometimes it's full of fun ("Party in the Clouds"), sometimes it's dystopian ("Sanageyama"). And it's always exciting to see those three Bohemians' view on this world. - Martin_Canine

2 We Got It from Here... Thank You 4 Your Service - A Tribe Called Quest

Fler brought trap to Germany because he was fed up with the trends that Kollegah has started, which were that rap has to sound epic, contain multisyllabic rhyming schemes throughout the entire song and has to contain witty word play in every third or so line - and care more about gimmicks than on authenticity. And while artists like Kollegah, SpongeBozz or Farid Bang succeed in said style, many others don't and come off as forced. Fler has been around since the beginnings of German hip hop and really came from the streets, but never made it as big as other rappers with such a huge output - until "Vibe" arrived. "Vibe" is all about the music. Not about the rhymes, not about an image, not about wit, about music. Fler tells stories from his life and mind, and his voice just flows along the beat like fish in a river. It just has a great feel to it, it feels alive, not pretentious in the least. No wonder it started a trend. - Martin_Canine

The times when Kollegah rapped self-ironically over regular electronic hip hop beats are over. Since the platinum selling "King" (2014), Kollegah's ego lets Kanye look modest. "Imperator" ("Emperor", "Ruler") puts the scale on a blockbuster level: strings, pianos, choirs, extremely hard drum kits, atmospheric synths, etc. form the beats. But all that is nothing compared to the leading actor: Kollegah. His vocabulary seems to expand like the universe and according to experts already surpassed that of Germany's most famous poet Johann Wolfgang von Goethe (that's like saying a rapper has a bigger vocabulary than Shakespeare), he twists and turns idioms and phrases around like the game Twister, is a master of playing with homophones, and has rhyme schemes that beat every other rapper on a global scale. Despite all that, "Imperator" is only my fourth favorite album by him. - Martin_Canine

Farid Bang is something like the light version of Kollegah. The two are best friends, have a similar style and also frequently collaborate. Farid's vocabulary may not be as insane as Kolle's, but with his punchlines, rhymes and charisma, he really is in the upper league of the game. Plus, Farid has the more interesting stories to tell. You see that, unlike Kollegah who was a middle class man and portrays the role of a big and wealthy drug lord and pimp, Farid has really gone through much violence and poverty, and that he appreciates every bit of money he earns with music, and values friendship in a world full of hate and greed. That does not mean he is not a threatening G rapper. It's all backed by heavy, dark and sinister beats. "Blut" is a continuation of all that, and it's as gripping as always. - Martin_Canine

I always liked Young Thug. I like what's weird, and I like when it's executed well. And with "Jeffery", he delivered his best work to date, and since he is very prolific (it's his third release of 2016) that means something. It's often called a mixtape, but it doesn't feel like one. "1017 Thug", which contained 20 tracks over trashy beats, arranged as a non-stop megamix, was a mixtape. These are 10 perfectly thought out songs, all individual and unique, but still it feels like one big overall project - that's an album to me. Young Thug is somewhere in between lyrical insanity and non-lyricism, often feeling more like scat singing, but then again riding the English language like a horse. Many will not get it, many will call it bad, but what Young Thug does that many more poetic rappers don't is feeling the music and flowing along it. - Martin_Canine

12 Rumble in the Jungle - Ali Bumaye

In 2015, Ali Bunaye, a personal friend of famous rappers Bushido and Shindy, released his debut album. It was largely a self-ironic novelty album about the artist's obesity (the album's best known song's chorus starts with "I want 12 cheeseburgers a diet coke"). The raps were absolutely average, but it was quite some fun. Thanks to his friends promoting the album, it became a commercial success, though no one took him seriously. Now, in 2016, he dropped his second effort "Rumble in the Jungle", and yeah, on the Big Pun-spoofing cover artwork he drops the mic in favor of a hamburger. But guess what: he's a conscious rapper now. There's a song about Palestine, there's a song about how he'll always live this lifestyle no matter how rich he'll be. And my favorite song from the album: "Ali war's". It says that in whatever terrible situation you are, you shouldn't be mad on the world, yourself, or other people, and instead blame Ali, who offers himself as a lightning rod. - Martin_Canine

In 2013, Shindy dropped his debut "NWA" and turned the German hip hop world upside down. He's not a menacing gangsta rapper, he's not a pop rapper, he's a laid back, self-loving, lazy dude with a taste for classy luxury cuisine who has a lot of high society glamour - that was really refreshing. His debut album immediately topped the charts, which resulted in his second album to be even more extravagant and lush (it starts off with a piano and trumpets) - and it became a chart topping instant classic again. Then he released a collaboration album with Germany's most successful rapper Bushido (who is a gangster rapper) and the album sounded like the soundtrack for a world leading elite - and it became Germany's "Watch the Throne". It got bigger and bigger each time, so expectations were high for his fourth overall album. Did he deliver? I don't know to be honest. The typical Shindy sound can only be heard on the majestic "Statements", an anthemic self-loving anthem featuring a ...more - Martin_Canine

You see, I think I get why many people were disappointed with "Views" while I liked it so much, because I experienced the same with "More Life".
When you hear Drake for the first time, it's overwhelming. The melodious flow, the melancholic mood, the personal lyrics, the minimalistic beats. The second time you're happy because you get more of the same that you loved on the first album. The third time it starts to feel a bit... repetitive, because Drake has that very distinctive style with little variation.
For many, "Nothing Was the Same" was the first time, "If You're Reading This It's Too Late" the second time, and "Views" the third time. My first contact with Drake was "IYRTITL", and "Views" was the second time. So I could still feel the dark, bleak atmosphere, and it felt wonderful, though it didn't blow me away like "Reading". - Martin_Canine

Okay, next to Kanye, Ryan Lewis might be my favorite American producer. There are songs on "TUMIM" that feel more like a broadway musical than hip hop, if not for Macklemore's raps. Macklemore might be the next Eminem in terms of lyrical quality, even though his humor is quite different, less shocking. He's more random and easy going. But he's also brilliant with serious topics - just check out "White Privilege II".
"The Heist" was a milestone, and quickly became one of my favorite American hip hop albums. "TUMIM" may not quite reach that level, but it still is a worthy follow up. - Martin_Canine

When Kollegah was not yet a platinum selling megastar who changed the direction German hip hop went in the 2010s, he was quite self-ironic and did not take his pimp/druglord persona all too seriously. And he rapped over trashy electronic/sample based beats. Nowadays, it is all big blockbuster cinema with dark orchestral beats and a menacing tone. Many fans missed the old Kollegah (even though I prefer the new one), so he released this mixtape as a bonus on the deluxe box set of his 2016 album "Imperator". The mixtape has a more laid back and comic sound, and is not as thought out as his major albums. The songs are mostly short (about 2 minutes each) and are arranged as a non stop megamix. Except for the last track which is an epic 12 minute storytelling song about the apocalypse and how a prophetic hero frees the postapocalyptic world. All of the songs of course have Kollegah's advanced lyricism. - Martin_Canine

This is a free mixtape from Future, which I downloaded on occasion. Some years ago I bought his album "Honest" and thought it was okay, nothing special, but this thing here is a huge step forwards and it feels hypnotizing and atmospheric. Are the other Future albums/mixtapes also like this or is this an exception? He's not very well known over here, so I don't know much by him. Maybe I should check him out? - Martin_Canine