Top 10 Horror Movies You Probably Haven't Seen But Should

The Top Ten
1 Forget Me Not

Just bought this movie a week ago ago and have watched it 7 times since then. Its not a perfect movie in any sense, but it has an interesting story with a touch of originality for a slasher film, while the "ghosts" were well done and kind of creepy, I do have some complaints about them, but that dosnt keep me from enjoying this movie for what it is, and a nice little unexpected ending was a refreshing thing since most movie endings suck now days

You're right about this! LOVED the story and very scary awesome special effects too! Totally different from all the others too!

Amazing little flick with great autmosphere and a truely disturbing and crazy story. Yet whats so crazy about this movie is that the idea of it is not that farfetched, sure it would be rare but something like this could actually happen in real life with how some children are raised and the effects of peer preasure. and wow at the ending, so wow laugh out loud

Great movie, don't watch the English dubbed version, it really handicaps the film, just watch it with subtitles and enjoy. Some may view this as just another slasher from another country, but this is truely an amazing horror film. The location is creepy, the acting, from what I can tell, is good and some of the scenes are just breath taking. This movie is what I think the low budget slasher film "shredder" could have been had it had better actors, higher budget, and a more established plot.

Loved the fact there is a female heroine. The back story is different and the "predator" is chillingly unique. I highly recommend watching the sequel as well!

4 All the Boys Love Mandy Lane

I waited forever to find this movie, and I'm so glad I did, it was a great flick with the ever so beautiful "Amber Heard" as the lead, and she does an amazing job. While this movie kind of borders on the edge of becoming just another teen slasher, but it never quite falls down to that point which is a good thing. The best touch of all was the truely shocking ending. Definitely glad I hunted this one down to add to my movie collection. 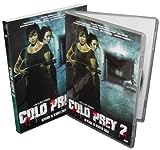 God this was a good movie, expecially if I'm saying that when I had to read subtitles laugh out loud. Amazing follow up to "cold Prey (Fritt Vilt)" that continued from the original in the tradition of the original "Halloween" and "Halloween 2", Taking our protagionist who just lost her friends and narrowly escaped the killer, and putting her in a isolated hospital where the killer takes his final shot at offing the strong willed protagionist.

Was completely and utterly surprised with this movie, it was so suspensful and nothing like I expected it to be, so glad I took a chance on this movie as it was great. Briana Evigan did a spectacular job and she is one of my new favorite actresses in this day and age, hope to see her in plenty more movies.

A good foreign slasher flick, kind of simular to "I know what you did last summer", actually really simular except with technology, but its well excuted and the shocks and twist were intriging and the look of the movie was amazing. The English dubbing for this one actually isn't all that bad at all, very depressing and slick feel to this movie.

8 Let the Right One In

I discovered this movie at the first ever After Dark Horrorfest and have since watched it many times and shown it to numerous people. Everybody is always impressed. Please ignore the silly-sounding title. This is a good quality suspenseful movie that plays on your phobias.

This was a horror gem that most people have not heard of. I was so pleasantly surprised (and scared) by this film. Don't let the lame title fool you. This is a very intense psychological horror film.

Yay to this amazing canadian flick! I really really liked this movie, it was kinda different and just kept getting better and better as it progressed. In the first 20mins I was so sure I wasnt going to like it and was getting dissapointed, but then I got into it and it surprised me. Some uniqeness and good acting and setting made this film a pleasant treat.

Nice, honestly probaly one of, if not, the best scarecrow movies I have seen in recent time, Crazy in a goodway and a pretty creepy autmosphere. This is probaly as good a killer scarecrow movies will get for a long while, I mean lets face it, killer scarecrows is not a very popular or effective subgenre. But to me this movie is much more than just a creepy scarecrow movie, its more along the lines of possession and it actually has a decent plot behind it, nothing ground breaking but definitely a treat for a die hard horror fan like myself.

I really liked this one! Great story!