Best Games Exclusively for the Playstation 3

The Top Ten
1 The Last of Us

The last of us is by far the best game on PS3! It has great characters and character development, the story amazing and there is so much more depth in many aspects (like the picture and story) than other games...

Uncharted 2 was awesome, Uncharted 3 was better, and the last of us became a masterpiece. You can really see how the creators, NaughtyDog, have evolved as each of their new games are released.

Easily my favourite game. I haven't been able to find a game any where close to being as good as this, therefore I have just been playing it over and over again! It is an amazing gaming experience, it always manages to emotionally touch the player's heart.
10/10 clearly.

No game compares to the last of us! Its an incredible experience, a gene defining experience! Best game of this generation hands down! And to see heavenly sword higher up on the list than this! That is just awful, vote this masterpiece up!

Best single player I've ever played. Online multiplayer is fun too, but none of my friends have this game and playing against strangers isn't nearly as fun. So not really a knock against the game, but where this game shines is campaign. 10/10.

Screw The Last of Us, this flipping game is one of the best ever!

To be honest, one of the best games ever deserves to be number 1.

It is really the worst of of the series but still can kick some ass without a sweat. Sony's own version of Indiana Jones. a combination of Lara croft and James Bond!

The greatest game for the ps3 this and god of war 3 are amazing! Epic, fun and thrilling uncharted 3 has it all! This is the best game ever... Until I play the last of us.

Worst of the Uncharted games but still fantastic.

Best action and story telling playing as the baddest person ever

InFAMOUS2 is a flawless game. It has everything a good game needs. Amazing story, fluid gameplay, great responsive controls, characters with awesome voice acting, an epic climax, cool bosses and lots of replay value. Zeke has got to be one of my favourite video game characters. Many games have given the player good and evil paths, but none have done so this well. I gotta say, the missions are innovative, dynamic and downright fun. I do prefer the good missions and ending, but it's just so much fun beating up civilians. The melee combat is excellent and a lot of fun to use and still kept simple, which is a good thing. As said before, the story is amazing filled with plot twists, great dialogue and two great endings. The good ending even made my eyes watery, and on a superhero game too. On the term of "super" using powers is really fun. Just fun. Being able to use grappling hooks, freeze enemies, bend gravity and much more is an amazing experience. Having fire, ice, electricity and ...more

Only flaw of this game is the ending for evil karma.

This game is filled with action I love it.

Before the age of the twilight set upon the gods, a legend rose to take his place among them. And even though Kratos sat on the throne as the new God of War, he was haunted by visions of his family - a family he himself murdered. But the Hands of Death could not defeat him. The Sisters of Fate could not control him. And on this day, the man, the legend, Kratos, will have his revenge.

Want to kill a god? this is it. a lot of Gore, epic boss battles, cool powers to have, puzzles are fun... A real stress-reliever.

Badass, ripped, and bloody, this has got to be one of the best ps3 games of all time.

This game is an absolute masterpiece! Perfect story, flawless gameplay, and it allows you to be creative and forces you to think about what decisions you should make in the game.

The last of us is great. Uncharted 2 is better. On Ps#, this is the best.

What more can be said about MGS4? Simly one of the greatest games ever made.

Actually its one of the best games PlayStation ever provided. a very emotional story with various choices. an epic adventure to feel.

Why is it not in the top 10? I guess no one has played this awesome game...

This game is better than all movies I watched, and YOU get to play it...

I only like it because of the shaun! And Jason! Glitches. never heard of the game until then. if you haven't seen it you can on YouTube

Not as good as among thieves
Also super hard 4 some reason. took me like 2 months to complete it. I did 3 in 1 week!

Gun fight, compact story, good puzzles, great graphics(consider the release year) one of the best game of it's own era.

One of the best games of all time.

Best game I have ever played great for any ages!

Favorite of all time!

The Contenders
11 Ratchet & Clank Future: A Crack In Time

OKAY I know I'm only 13 and got a lot of life to live too. I love this game. Best game of all time. Just this is better than Ocarina of Time and Call of Duty. Call of Duty sucks. I hate kids my age who are a Call of Duty addict!

This game has excellent game play, and a great story. 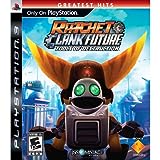 Most people praise this game because of difficulty.
I agree, it was rather refreshing, to play a game that doesn't hold your hand and doesn't show you big indicator to point you in the right direction, while robbing you from freedom of choice.
But personally I recommend this game because of atmosphere, constant sense of hopelessness and plot, which you actually need to unravel by yourself. Not everything is explained, so you can use you imagination and intelligence to help yourself understand what actually happened in Boletaria, and more importantly - why. So instead of just yet another forgettable adventure you get something that will make you think about human nature, and of course die a lot, and in turn experience great success when you get that boss that get you killed so many times, just to see what lies ahead.
Or to get to that shiny item on a cliff, that you weren't able to access before.

"Has the land found its savior, or have the demons found a new slave? "

For those who are bored from hack n'slashes, this is the answer. a bit harder than it should be, but this is something you can call proving ground!

The atmosphere and difficulty are like nothing else, this is an absolute classic.

While having a ps4, bought ps3 especially for this game. No regrets however.

This is the top 10 best list, not the worst. Get this out of here.

Needs to be higher, one of my favorite games! Hate QD for making this ps exclusive...

16 The ICO and Shadow of the Colossus Collection

These are two very special games from PlayStation. If you haven't played them yet you may think twice before voting but... if you have played it I am quite sure you have voted already. I never met anybody who played and didn't liked these two epics!

Two of the best and most beloved videogames of the 21st century in just one package. Enough said.

This game may not be the best conventionally but it's more like a stunning work of art than a video game in my opinion, so it's not really comparable on this list. Plus you have to admit that it is impressive budget-wise.

All right, it's corny, but I found Journey kind of profound. Like, a real "games as art" type of game. An experience of an emotional journey that could only be done through an interactive medium.

Super underrated game, ps3 still gets a lot of use mainly for this game

I prefer this over the other Gran Turismo games, I didn't like it at first, but lately I've had a better appreciation for it

Was my favourite car game of all time until GT6 came out. Who can get board with 1,000 plus cars?

23 Ni No Kuni: Wrath of the White Witch

Love the story and the animations. The gameplay is also exellent

Excellent game, I played this as a stress reliever during a difficult time in my life. I even got the platinum trophy.