Best Christmas and Holiday Season Albums of All Time 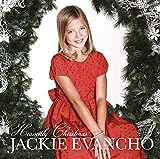 What can you say about a voice, a song, and a singer like Jackie Evancho when nothing you can say quite captures the pure elegance you are experiencing? Every time Jackie sings, another level of incredible presents itself. Thank you Jackie.

You will think this is the voice of an angel from heaven, but it is just the voice of the newest and best singer the world has ever known.

She is a bit of heaven!

The best without a doubt
It combines Metal with Christmas Music perfectly.

I listen to this CD anytime of the year. Very easy on the ears and emotionally bolstering to your heart. Il Volo are so fresh and awesome with their style and renditions of traditional music from around the world. They sing in different regional languages which is an "outstanding" bonus for many cultures. Even the angels blush when these young gentlemen sing! The Buon Natale CD is more than worth it's weight in gold!

They make the most beautiful music together, and this Christmas Album is no exception... Their voices are so classically trained and it shows with every note they sing... This Christmas album has something for everyone... Its is enjoyable for young and old... There are no better singers on the planet than Il Volo...

Buon Natale is the epitome of the Christmas season which is all about music! Il Volo is taking the world by storm and they have the voices, talent, and personalities to create the best music ever. Buon Natale is a must have in your Christmas collection. It is #1!

The best traditional Christmas songs ever. Il Volo, with their awesome Italian heritage and awesome tenor and baritone voices, brings Christmas to you in ways you would not believe. These voices are indeed heaven sent.

8 I Am Santa Claus - Bob Rivers

9 These are Special Times - Celine Dion

The greatest Holiday album ever. Celine showed a very special and unique vocal as always. All the songs were powerful. No one can beat her manner of singing! She's the Queen!

WHY WOULD I NOT VOTE

Don't miss the video of her Queen Latifah appearance.

Platinum-selling EP for a reason. It's great!

Only the "Special Edition" contains the special second disc of Christmas songs.

This isn't even a Christmas album... There were maybe one or two Christmas songs.

Available at Walmart, same price as the regular CD for a limited time.

This album contains many of the songs from the Awakening Special Edition Christmas CD, along with songs Jackie recorded on other artists' albums (e.g. Placido Domingo, Peter Hollens, Vittorio Grigolo) and the title track, a new recording for 2016.

Her new release for the 2016 Christmas season.

Kelly Clarkson manages to merge Christmas and pop and put it all in one album. It's a cool album.

She is an amazing singer and I love this song

This came out just this year

Elvis blue Christmas album the best of them all

This is not Blue Christmas.

This album is the perfect soundtrack to any Christmas.

How is she behind Justin Bieber? All Christmas albums come and go, but Mariah Carey's charts on iTunes EVERY single year so far. It is definitely the most popular album and therefore should at least be in the Top 10.

Mariah Carey is the greatest singer of all-time. Her first Christmas album is perfect but her second one Merry Christmas II You is even better. All hail Queen Mariah!

Best hands down! Her voice is perfection in this album! Please one of the best Christmas songs ever and she wrote it!

All I want for Christmas is you is good

THE greatest singer of all time. Even in her later years, Whitney still had THE VOICE. Love this album, best holiday album of all time!

23 My Kind of Christmas - Christina Aguilera

This album went really unnoticed, which is disappointing because it deserved more attention and praise. Christina is undoubtedly an extremely talented vocalist, and she's been in the music industry for much longer than most of today's biggest stars. I highly recommend this album to everyone reading this, you're seriously missing out if you don't purchase it.