The Top Ten
1 The Secret of the Unicorn

I watched the movie based on this comics and it's great.

2 Cigars of the Pharao 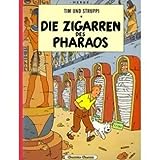 The Calculus Affair is an awesome tintin comic book. The genré of this comic book cannot be provided, as this book contains thrilling adventures, a really well plot, suspense/mystery, and of course an exclusive comic relief. This was my first Tintin comic. Hope it will remain the best forever...

One of best creation.

My favorite. Calculus actually gets mad!

Probably the best tintin book ever!

Don't call me a goat,

Tintin in Tibet has the double meaning about friendship. I love Chang as the characterism of his best friend from China. The atmosphere is also beautiful and the chinese budists. A masterpiece!

At last a top ten tintin list with In America on it. My all time favorite Tintin book love it from start to finish

Too Good. Bad for gangsters of Chicago

Love all the books, but for some reason, this one was the one that captivated me the most. For one it has the debut of Calculus and the bits set in the ocean and on the island were very well thought out.

I was pretty disturbed when I found Cigars of the Pharaoh in first place. There were a handful of loose ends at the end, all of which were "tightened" by The Blue Lotus. I'm going to say nothing about the plot due to spoilers, but I will say that Tintin first met Chang in this book. So Tintin in Tibet, which is one place higher, and features Chang heavily, could not have happened without this book. Now, already breaking my spoiler alert rule, I never would have expected old Rastapopoulos as an antagonist. Then again, if he wasn't that, then Hergé may as well not included him. The madman who tried to cut off Tintin's head was hilarious, and his "experiment" with Snowy was comedy gold, lie the rest of the book.

This action packed one is great the list should be-
1. Tintin in america
2. Secret of the unicorn
3. The blue lotus
4. The broken ear
5. Cigars of the pharoh

The story is so good

12 Explorers on the Moon

13 The Crab With the Golden Claws

Though Tintin wasn't the main protagonist in this case due to this entry being the First time we meet haddock it was still a great story.we also meet first mate allan who happens to be my favourite Tintin villain.The Thom(p)sons
were hilarious in this especially the ending when they accuse Omar Ben Saalad of selling opium which he denies and then just as he is about to pull the trigger,allan breaks the book case behind him down saving the Thom(p)sons!

So thrilling and good

This and Prisoners of the Sun are the best Tintin Adventures. But truth be told, I love them all.

The artwork is amazing and so is the twist in the tale, as well as the fact it takes place over only 24 hours. Some critics say it is just a lame action piece. There is a lot more going on especially with the developmental psychology of Carreidas and others if you look past the machine guns. The only better artwork was in the Picaros possibly.

This was really scary

I like how this one has more fantasy in it and the part with the giant mushrooms and it is the most exciting.
1. The shooting star
2. Destination moon
3. Cigars of the pharaoh
4. Tintin in America
5. Red rackhams treasure
6. Secret of the unicorn
7. Crab with golden claws
8. The broken ear

This one's so funny why isn't it higher?!

18 Prisoners of the Sun

Artwork is amazing, although it has been dated too strongly with 1970's references so is not timeless in that respect. The main characters some say are lifeless, but this is progression and they have lived and experienced many adventures which would change us as well. It has a finale air to it and is fitting as it is the last TinTin adventure

21 The Land of Black Gold

22 Tintin in the Congo

A great adventure in Africa. Sadly hated by today's ignorant and totalitarian youth.

23 Tintin in the Land of the Soviets

A mild portrayal of the savage socialist regime which killed millions of innocents. Still, a nice adventure.

This was the very first Tintin book. it was in black and white but it was still an instant classic

With simple drawings, Tintin in the land of Soviets is one of the most attractive Tintin magazines out there

24 Tintin & the Land of Sharks

Tintin goes back to Syldavia! I agree it was an episode/movie first, but it has been a book too.

Even though it is unfinished, the classic action is entertaining. the simple sketches are nicely drawn and the fact that it doesn't have a canon ending makes it one of the most important tintin magazines