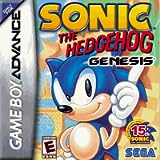 I don't feel like this game is that bad! Sure, it's not the definitive way to play, &, if you wan't a portabile version of the 1st Sonic game, just get the Virtural Console port on 3DS or buy the Classic Collection (M y perferd way to play), they run just like the Genisis! I feel like if they either made it for something else or spent more time making it, than it would not of been that bad! But, number 1! Also, you wanna GBA Sonic, just play Advance!

Somehow the game performs like its on tar. Its not that bad in the first act, but soon enough it just gets slower and slower until it's a struggle to play.

Why just why! 2006 wasn't at all a good year for sonic and this is the 2nd reason why (the first reason well I bet you can guess that)

Sonic '06 was as overrated as:
Hotel Mario
The Room
E.T. the Extra-Terrestrial (Atari 2600).
This is way worse.

Why is this on the worst list
One of the best

So They Gave The Worst Game Ever A 20th Anniversary Remake Because Of How Bad It Was? , What's Next Superman 64 HD? , Or Superman 64 3D? - VideoGamefan5

This Game sucks so Bad

This game is fantastic. I don't get how its on the worst list.

How in god's name did this get on here.

Come on man this is just for kids.

We are not sexist. People who hate this are guys and gals. we just don't like this game

Its just bad and a struggle to play. A rushed port that struggles to function. It needed more time or something. - sitebender

I love this game first mk game I played

How is this not number 1, MK Advance is a terrible Mk game with awful graphics and terrible control. - egnomac

Way worse than the GB version of MK3.

12 The Ripping Friends: The World's Most Manly Men!
13 He-Man: Power of Grayskull
14 The Land Before Time

Not faithful to the arcade classic.

Dude this is literally so hot, how tf did this get here.
Uwu

Grand Theft Auto was not made for GBA, its just too big.
As well as Nintendo trying to make it completely kid-friendly.

What a terrible slideshow