As the name suggest here are the must play Game Boy Color games.
The Top Ten
1 Shantae 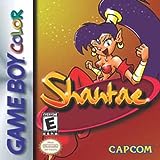 The most underrated and underappreciated game ever released on Game Boy Color though a lot had to do with bad timing being released as the GBC was on its last leg. - egnomac

2 The Legend of Zelda: Oracle of Ages

More challenging than Oracle of Seasons but that dosen't stop it from being on of the best GBC Zelda games. - egnomac

3 The Legend of Zelda: Oracle of Seasons

One of two Zelda games produced by Capcom Oracle of Seasons is more centred on the action unlike Oracle of Ages that focus more on the puzzles. - egnomac

Plays like Gold & Silver but adds more stuff like the battle tower and for the first time the ability to play as a female trainer. - egnomac

A game where you control by moving the Game Boy Color. - egnomac

Its an upgraded version of the orginal game boy game only with color. - egnomac

Waluigi made his first appearence in this game and was AWESOME!