Batman Arkham City has the most beautiful levels that Batman can utilize with all the Bat Gadgets and Technology. Batman is as well the right decision on the part of Sony and their Eight Generation consoles to include in their games collections as a saga. Batman can really live and explore areas never thought of before in the gaming industry at these levels. Batman can enter a structure and find a whole new area with those same strategy elements that Batman can choose to use for defeating the criminals of Gotham City. Batman is also sort of a Phantom of the Opera as knows the City inside and out, is the force of Good and Light with the Batman despite the costume darkness. Conquer Arkham, Live in the Batman and then Improve the Game. The Best Game to Ever Bought is Batman: Arkham City.

A genius, well handled story accompanied by interesting characters, a brilliant soundtrack and satisfying gameplay. It also manages to juggle the stories of the Joker and Batman's shared illness and the mysterious Protocol 10. Overall, a great experience that makes up one of my all time favourite games. I recommend all who have not tried it, fan of Batman or not, to pick it up and play it.

P.S., The Mister Freeze battle in Arkham City is just awesome. Best battle in the series.

I think it's at the same level of the previous (gameplay, design, music and characters' voices), but its history and bosses fights are just the best in the entire series. You really fell the tension of the moment and when you have solved one trouble, another one appears which you have to add to the "to do" list.

It's a different Batman experience from the others: a linear game where:
1) you play an excellent storyline,
2) solve riddler stuff
3) find out easter eggs and the story of Amadeus Arkham
4) After finishing a level in a building, once at time you can go and speak to the Joker in the Visitors Room

All this in a linear play, from start to finish.
- dark atmosphere
- play as Joker
- nice challenges in the DLC pack
- can be played in 3D

This is one of the best Batman Games Ever, just inferior to Origins and Knight

Ok This is a really good game but a badly placed one. Everybody face it. This game should be number 2 not number 1 or 3 or anything below this game belongs at 2. Out of the Arkham Series Batman Arkham Origins is the worst. The list should go Arkham City,Arkham Asylum, Arkham Knight,Then Arkham Origins. Arkham Origins Characters where Poorly made and barely matched the Arkham Storyline. This is Probably what killed it are you ready? Ya sure? Well here I go The Joker wasn't Mark Hamill and that is what made it so bad.

Arkham City was great but nothing will ever beat the original one. I had more fun killing goons and solving puzzles, it should be number 1.

This game is Amazing please give it 10 out of 10 best game ever.

Best Arkham game without a doubt and possibly the best game ever. Story and Side Missions were perfected ( including the "Season of Infamy" ) and seemed like all very urgent files, ambiented in a new PS4 open world called Gotham City. DLC, settings, graphics, free roaming, atmosphere and all that stuff is super well done. The story was very mature and felt like a pshycological thriller! The too much Batmobile sections and the weak boss fights were the only game's weaknesses. 9,5
Followed by, 2nd best in my opinion, Origins, in 3rd Asylum, for being a linear and compact Batman game with a dark but also brilliant pacing, and finally 4th City. Don't get me wrong I really enjoyed the game but I think it's not as good as the others, and literally overrated ( JUST MY OPINION )

This is Probably my second favorite after Arkham City. I feel the fighting, the way he move, and the graphics are all way better then the other games. Also a huge map compared to the others along with the buildings are taller. You also have the friken bat mobile. Only reason Arkham city is better is because of the story. I'd give the two a tie.

This game sucked, overrated, too short, too bland, the bat mobile was great, but overall 7/10. Its nothing special at all, it feels empty character wise, just batman, gordon, and arkham knight, and joker. Every other character in the game is non memorable like they never were in the game even catwoman.

Most fun I've had in a batman game! Best story was asylum. Best choice of characters/fights was origins. My favourite was however City but now Knight

Best batman game as it had a compelling story line mixed with the exciting new detective mode. The graphics were as good as the others and the amount of villains were also a decent amount (not too many that made the game boring.) Finally, the game should have included a riddler mission just to allow them to have more references and Easter eggs.

Better than Asylum and City, excellent atmosphere and storytelling, side content was way better than in Arkham City and the DLC were also pretty good. Just isn't on the Arkham Knight level

This game didn't get enough attention, it was actually a pretty good game. I would say it's the arkham asylum of the ps2, Xbox, and gamecube.

6 Batman: The Enemy Within

Has possibly the most unique and sympathetic take on the Joker yet. Truly underrated.

I love this game, and I wish there would've been a 3rd part of the game series!

This is undoubtedly one of my favourite superhero and Lego games of all time, with a great cast of characters, a good story and an amazing character customization system.

Extremely great game with a large cast of characters. The game also looks really good compared to the first one.

You can be Alfred and drive a school bus. Enough said.

Probably the best in the Lego series, never mind the Lego Batman trilogy.

Lego batman is fun and all but in a few months batman arkham knight is probably gonna be second or something on the list think (batmobile, more combat, stealth, fear takedowns, dlc's and more)

This was the first Batman game I played and I remember it being awesome at the time but the new ones beat it by far.

The Contenders
11 Injustice: Gods Among Us

First batman story that made me enjoy the Bruce scenes more than the batman ones.

This game is average

15 The Adventures of Batman & Robin 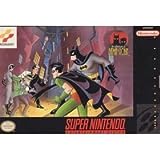 19 Batman: The Brave and the Bold

The Arkham series is amazing with the saga to explore. A high in success series, beautiful renditions and free landscapes to grapple with. There are 5 of these at the least, a beautiful idea for the Batman franchise. Am fair and sure that 'Return to Arkham' is not going to disappoint base on what the Arkham series has to this time span and a fine finish for each installment. Pretty darn cool.