Here is a list of some of the strangest things ever stolen over the years, which could make you question what this world has come to.
The Top Ten
1 Beach sand

An estimation of around 500 truck-loads of sand, which is believed to have been sold to rival resorts, vanished from a Coral Spring beach in Jamaica. Over the months, no arrests were made nor is there sign of sand.

What the Hall of the absolutely most confusing reality.
Now I gonna aprecciate more Bohemian Rhapsody introduction.
Is this the real life?...or it's just fantasy?

In 1989, $10,000 worth of frozen bull semen and embryos were stolen from the California Polytechnic University. The embryos were later found, but the semen was never located.
Years later in early 2016, three tanks of bull semen worth of $50,000 had also been stolen out of a truck parked in Turlock, California, but these, unfortunately, has also never been recovered.

I imagine it's in high demand with cattle ranchers.

Elmer's glue. Hot glue is so much better.

What? What is the purpose of that.

In 2017, 5,000 jars of Nutella, which valued at about $21,000, were stolen from a parked truck trailer in Bad Hersfeld, Germany. Why would you need that many jars of Nutella and what would you do with them?

Well, have fun getting diabetes! Plus you're just not going to be able to consume all this Nutella before any of it expires.

I guess that person really likes Nutella? by the way, another great and interesting list!

That was probably my evil twin brother form a parallel universe.

In 2012, a group of metal scrappers stole a 10-ton steel bridge, claiming that they have been hired to take it down. According to a Railways spokesman, the theft was worth millions. The bridge hasn't been returned since, and it is believed that the thieves sold it for scrap metal.

That is way too much work just to get scrap metal. You'd have to break the concrete or asphalt around the steel.

How they can steel that bridge. 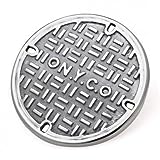 Not very smart. You can't just go in a junkyard and expect to be able to sell manholes this easy. Unless someone that works there is a crook and willing to do such business.

In Los Angeles back in 1990, manholes all over the entire area had been stolen. The two culprits were later caught when police found them selling the covers to scrap-material dealers.

Those people must have been dedicated.

Keith Bradford stole a condom machine off the wall in the toilet of a pub in 1994, carrying it as he walked his way home. The man was so drunk that he didn't notice that police followed him on his way.

Must be very practical to have a condom machine next to your bed.

Why would there be a condom machine in public? I don't get it.

I'm guessing the people who stole them didn't want kids to see testicles, even if it's an animal's. That's the only explanation that seems plausible.

As part of an event held in Edmonton, Canada back in 2001, the city made bison statues painted in the colors of the flags represented in championships. However, 20 of the statues' private parts were snatched for whatever reason. What do you plan to do with THESE?

A woman stole $305 worth of buttons from a department store off of some clothes in Miami back in 1992. It later turned out that the woman was Felicidad Noriega, the wife of Panamanian dictator Manuel Noriega.

A 350-pound inflatable gorilla anchored on a roof had been taken in 2010. No one was ever caught for this theft, but it is believed a number of people may have stolen it due to the large size of the item.

Owning an inflatable gorilla has many benefits. Which is why I have ten of them in my backyard.

Why would you need that?

The Contenders
11 A cabin

A couple went out to their cabin, only to find it completely missing. In addition, even the furniture and camping gear inside have been stolen, and all that is left are the concrete blocks the cabin was standing on.

Building a cabin is expensive, it actually makes sense why someone would steal that. Still, very impressive.

First of all how? Second of all why?

In 2012, a entrepreneur from Chile, armed with a refrigerated truck, stole 5 tons of ice to make into "Designer Ice Cubes".

What is the purpose of glaciers. Maybe they think that glaciers can be use for beverages.

The emperor penguin is the tallest and heaviest of all living penguin species and is endemic to Antarctica.
17 Human semen
18 Albert Einstein's Brain
19 Chocolate bars