The Top Ten
1 Hail to the King - Avenged Sevenfold 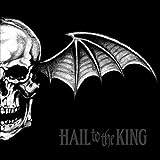 YES! A7X 4 LIFE! Hail to the King is just BADASS

Amazing album, a mix of all of Skillet's music from previous records. Fantastic album

3 Temper Temper - Bullet for My Valentine

My mom got this

Dude some of these albums are metal, no rock. You basically copied MetalFoREVer1228

4 Sempiternal - Bring Me the Horizon

Absolutely amazing creation by bring me the horizon. Sleepwalking, shadow moses snakes start to sing are awesome song from the album.

9 Notes From the Underground - Hollywood Undead

14 The Wrong Side of Heaven and the Righteous Side of Hell, Volume 1 - Five Finger Death Punch

Having only heard two Device songs, Haze ft.M.Shadows and You Think You Know (from the August edition of Metal Hammer), I gotta say this band is amazing and I look forward to getting this album

HOW IS THIS NOT IN THE TOP TEN! This Album is Absolutely Amazing!

21 From Death to Destiny - Asking Alexandria

All those who think Paramore should've ended with the departure of the Farro brothers might want to re-consider after giving this great album a listen.

The track I Hate To See Your Heart Break is my new favorite Paramore song, if not then its in the top 3