Here is a list of Mario games with the most epic final battles against the one and only King Bowser Koopa, who has kidnapped the princess many times over the years. Mario has always rescued her and defeated the evil Koopa King in many different ways. Let's pay tribute in this countdown (technically, count-up).
The Top Ten
1 Super Mario 64 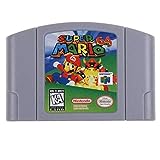 This game has one of the few Bowser battles that are actually hard. The first two battles aren't too bad, where you have to make him hit only one spike bomb. In the third and final battle you have to slam him into three spike bombs, which can be pretty difficult. When swinging Bowser around it's hard to tell where you're going throw him unless you're close to a spike bomb. After two hits Bowser will make sections of the platform fall off and make it look like a star which makes it even more challenging. Bowser looks weird like most other enemies in the game and the music also sounds kinda creepy. But altogether it's a pretty interesting Bowser battle.

It's a little basic and the others are more epic. my best Bowser battles must have something epic like armor in paper jam or just powers like in dream team

Not hard any more

He's mean, he's green and he knows how to make a scene. Bowser is one of mine and worlds most favored video games of all time. sure Mario 64 was good, but galaxy was better. music is epic and battle is awesome. this does NOT mean I don't like super Mario 64.

I really like this boss because it takes EVERYTHING you've learned throughout the game, spinning, jumping, etc. And uses it for a final boss as amazing as ever!

This is my all time favorite boss!

Despite being so easy, this battle is beyond amazing. You're fighting an absolutely enormous bowser while free falling through a black hole, pummeling meteors at him while what is possibly the greatest final boss theme of all time is playing in the background.

I beat this in, like, 10 seconds (not that I counted). It's, without question, the easiest final boss from any video game, in my opinion. Too bad that an epic orchestral song with a choir got wasted on such a pathetic final boss.

The Bowser was enormous and the graphics were so good. This is easily the most creative boss fight in mankind although really easy.

This is my favorite Mario game. I love that they did a different setting instead of the Mushroom Kingdom.

Finally the button doesn't save Mario's butt this time! Yes! Something new! Plus you see Bowser in his shell in this game! Bowser has so many attacks!

Like that the button isn't getting all the credit for rescuing peach.

I'm not into how the battle goes. I'm into that MUSIC!

Overrated. Not as fun as people say. It's too easy.

It's a close race between Bowser, and it gets your heart pumping. You have to move fast in the end, which is both hard and fun!

The music, the special fire balls, the slow motion death all.

Babe this is the best boswer fight on a device. Just interesting and very surprising as you run from boswer in the end

This Bowser battle is well-known for introducing the Koopa Clown Car. That thing used to scare me when it got angry and started to try and crush me. This is also one the first battles I've had with Bowser.

The all time best.

How can you not like this final battle? You have to defeat a scary gigantic Baby Bowser before rams right into you! Also lets not forget the totally epic battle music.

Kamek's dialogue, "Honey, I enlarged the baby... and deflated a gamer's psyche! " No seriously, I had nightmares about that fight!

It starts out as the classical fight in Super Mario Bros, then it turns into an escape from a gigantic Bowser! EPIC!

The same as the classics until Bowser turns into a GIGA BOWSER and crushes everything. More of a stage but still awesome

On the bottom bro

Meowser is awesome. It really gets the four people playing to actually go crazy for once. But now I gotta say this:
People troll on galaxy for having the samme fights over and over again with Bowser, but isn't Super Mario 64 the same? Especially since Galaxy adds in more stuff for its final battle? 64 fnboys. Everyone loves super Mario 64 and Ocarina of time (Both are great, but overrated too, everyone lvoes them forthe same reason). Galaxy is just as good, and they don't have the best boss. This does. End of story. Bowser mixes oit up a bit and we get one heck of a battle. he makes the fur FLY!

By far the best Bowser battle I have ever experienced. Everything from the concept, to the intensity, to the setting, and even the music was basically perfect.

Absolutely the most awesome Bowser battle ever. For once, he's being SMART...until he stands on the POW Block

Easily my favorite Bowser battle from the original four. What makes this fight my favorite is the fact that he engages you in combat. It took me years to beat him!

You punch him with his hat. I don't think that the previous sentence made sense to you, but it will after you fight him.

It is an encredible final boss fight. I do not know how Nintendo did this.

By far the coolest and best!

The best Final Bowser Battle. Seriously. In most games Bowser is more often than not, a joke. Paper Mario shows the inner villain in him, Showing what he's capable of, and how deadly he can be

14 Mario and Luigi: Bowser's Inside Story

There we go! This one's the best! Bowser gets to see how strong he actually is. Plus Fawful's inside of Dark Bowser! I'm done. This battle's just lit.

This isn't a final Bowser battle! You're playing as Bowser while battling a darker clone of himself!

Although you battle against Dark Bowser and play as the real Bowser, this battle is still cool.

This battle is awesome because you can do what ever you want. From giving him wings, to stacking him on all enemies.

You can make bowser do anything you want!

And with this battle, a legend begins...

This battle is TERRIBLE It's just a lazy remake of New Super Mario Bros Wii all you do in this battle is: Jump on platforms to avoid the rising lava, Jump over fireballs from the bowser faces on the wall, And avoid Bowser's VERY SLOW claws. They were not even trying!

How is it a copy if it's made by the same creators?

No matter how much the game sucked, the final boss looked epic. You can't deny it.

I'm tired of everyone whining about how Antasma wasn't the final boss. After all Bowser has been through in the previous Mario & Luigi games, I'm glad to see him finally defend his reputation as a villain. This also one the hardest Bowser battles we've had in a LONG time.

You fight Bowser when he is practically a god and can do anything he wants! The music, Adventure's End also rivals that of In the Final, the Mario & Luigi: Bowser's Inside Story final battle music.

This is my favourite game of all time (don't hate me), and it's final Bowser battle is just epic. If you think about it, you're kind of fighting to save Bowser from the black paint that's possessing him.
I also like how the music is a remix of a few songs from the game, such as Eerie Hotel, Bowser's theme and, of course, the title theme.
I haven't finished this game yet, but I know that the final battle is going to be epic..