Am I glad to see this on top of the list. Halo takes the crown. It's so unique and diverse, and the storytelling is amazing and exhilarating. Combat Evolved was the one which allowed me to explore the beauty of Halo, 3 was the one who allowed me to finish the fight in the most thrilling way ever with those amazing voice acting and quotes said by the arbiter or Johnson, even the marines! 4 took another step. With the opening of the reclaimer saga, it introduced a new cast of characters, the infinity and the most amazing villain the Didact. But as unique halo is, 4 was THE unique halo. It is actually a love story, unfolding the companionship of Cortana and chief and transforming it into a lifelong friendship. Cortana, the machine, the teaches the chief to be not like a machine, that was a blast. This game set my heart apart especially the parts where Cortana screams and chief protects her. And also who could forget the end Cortana chief cutscenes. These were the best games in the ...more

RIP Halo 2001 to 2014. Halo 5 sucked in my opinion. Halo: MCC is not a dead gae. I can find pretty decent matches fairly quickly. As far as the bugs and crashes go, I haven't really seen much. However, once in awhile a game will crash. Anyway, I personally enjoyed Halo 4. had a terrific story, and the multiplayer was fun in my opinion, even though it lacked skill like Halo 3, it was still enjoyable and fun. Halo 5 was just the absolute worst game to ever be released. The story was F- Multiplayer was a solid C. Multiplayer was was OK, but I personally couldn't get into it that much. Menu layouts and armory = F-. So confusing and unorganized. Also out of like 150 armory pieces, only 10 look cool to wear. No split screen. Gameplay = C. Weapon design = C. Halo 5 was pretty much a below average/poor Halo game.

A lot of people say Call of Duty is the most iconic FPS franchise, "where it so easy"(arbiter quote). Even though 343 has not yet made a balanced halo game,(master chief collection does not count), halo 4 has an amazing campaign and halo 5 has OK multiplayer. The Bungie games are still the best. I never really liked halo 3 campaign, but the multiplayer is awesome. But it never came close to Bungies greatest success... halo reach. The campaign and multiplayer are almost perfect! Bungie really went out with a bang. Just like Spartans, halo will never die

The story, the gameplay, the characters, everything is just perfect. Made many memories with this great game. From PC, Console to even mobile this franchise has grown successfully.

I hope it stays at the top.

The greatest FPS franchise in the gaming world. The Battlefield series is no match for this amazing fps franchise, at least not in single-player.

Call Of Duty in the best, because it is has the real world and weapons.But newer Call of Duty games are not in the real world, they are much like Halo.

Why wasn't this here?

Should be near the top

It's downright disgusting that the game that MADE the FPS genre is not even in top 3. Should be #1 along with BioShock. The best of the best in FPS. Every game in the franchise is iconic.

Critically acclaimed masterpiece...followed by Half Life and Bioshock...

What it lacks in good campaign, it makes up for with amazing multiplayer. The amount of destruction in the games of this franchise is simply jaw-dropping. For example, in BF4 the skyscraper in the map "Siege of Shanghai" can be destroyed. Not only that, but the vehicles make it more challenging and is a good twist. CoD's multiplayer just simply can't compare in my opinion.

Call of Duty prides itself on infantry warfare yet battlefield does infantry better (more skilled, more recoil more headshot multipler, there is even a negative multiplier for stomach and below) with so much more versatility. CSGO gets boring yet in battlefield there is always a new thing to try and master.

I just started playing Battlefield and I already enjoy it because it is actually different from most fps games with controllable vehicles and it requires actual skill, but you don't have to tryhard to have fun on the game."

The story is OK, but the multiplayer is great. Big maps, cars, helicopters, Planes, tanks, boats and mire. Call of duty is wors than Battlefield. 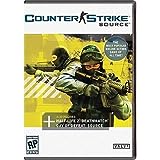 One of my favourite shooters of all time, people criticize it because it doesn't have sprint or iron sights like the other shooters, but it doesn't make it bad, especially since you can say that most other shooters don't have any recoil, anyways it's a game that caters to more competitive players and I like that.

Hard to learn, absolutely impossible to master. This game requires so much skill to play, and there also is an extremely competitive rank system.

The best shooter game ever...

Best shooter ever. Nice Weapon handling and best story. There is no shooter that has a story only half as good as BioShock

You know its on here the first was good the second was meh and infinite was awesome.

Did I ever tell you the definition of insanity?

The franchise which got me fell in LOVE!

Still one of the mot breathtaking Gaming experiences for me.
You need to play this If you haven't. Yes it's 2015 but so what. Make your self a favour. You know nothing If you don't.

Great games especially the second in the series.

It's a dead franchise...

Wolfenstein 3D broke the entire ground that FPS stands on... And it wasn't just a ground-breaker in that mind-set. It featured bosses that were extremely evil and sadistic, from the maniacal and diabolical Doctor Schabbs, who experimented on humans and created deadly mutated fighting machines out of them... To the menacingly demonic Hitler, who wore a battle suit and fought with brutal precision with dual chainguns and rapid fire. The game was not just a breakthrough for FPS games, a definitive game for bosses, a controversial title for the Nazi enemies, and adding a tremendous amount of levels and secrets, it was also the most powerful title that fed into the mainstream for decades to follow. Wolfenstein 3D is the legend of all FPS games, hands down.

One of the three great First Person Shooters of all time – along with Doom and Half-Life. Wolfenstein: The New Order – brought the series back to life and was damn good fun playing. And Wolfenstein II: The New Colossus – with it's beautiful artwork and lived-in feeling of the submarine, is my favourite of the whole series.

Fallout 4 and New Vegas were my intros to gaming. Love these games.

How is this not further up?

The best thing about Crysis is the nanosuit that you wear. That nanosuit gives you everything, from breathing underwater and nanocells that enhances your muscles and your cells regeneration to being completely invisible and completely indestructible. The plot of resisting an Alien invasion while at the same time fighting ruthless human enemies is the best an FPS game can give its player. That is in addition to realistic graphics and over the top abilities and physics. Crysis is for sure the best at what it does.

OK, so Metroid doesn't have as much popularity as other Nintendo franchises like Mario, Zelda, and Pokemon, but it still holds up incredibly well.

Set the standard of multiplayer games for years to come. If it wasn't for this game, Halo wouldn't exist.

One of my favourite fps franchises of all time with possibly the best enemy types in all of gaming history even though shadow fall was total crap compared to other games in the series.

Killzone has the potential to be the best with good graphics since killzone 2 was released it was ahead of its time in both single player and multiplayer and continued it formula with 3 and 4... Too bad its one of the most underrated fps