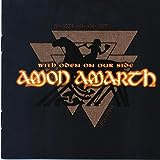 Not relevant, this album never deserved the best Melodeath album award. There were far better albums released during that period. Amon Amarth is an overhyped and overrated band.