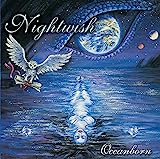 For all of the criticisms of Angels Fall First, it still somehow sounds more polished than Oceanborn. Otherwise, the musical aspects are much better, the band has found a genre to exist within, and Tarja has space to really sing. There's a lot of potential here, and some genuine hits, but the production is cluttered and often gets in the way of that.

This really is the best album. Nightwish had found their style and the pure music and heavenly singing by Tarja flourishes all the way. It is a treasure of this genre and a gold mine of best songs and music. It is also real and pure Nightwish...in the most noble format. Love it!

In my opinion Once, Dark Passion Play and Endless Forms Most Beautiful have better songs (Ghost Love Score, The Poet and The Pendulum and The Greatest Show on Earth, respectively), but Oceanborn as an album is the best. Good from start to finish, consistently amazing.

I never got into any of Nightwish's music - until I listened to Oceanborn. It definitely sounds like Nightwish, but has something magical to it, that to me isn't present in any of their other works. I still don't like Nightwish. I'll always love Oceanborn.

While a bit uneven as an album, Once would go on to define the sound of both Nightwish and symphonic metal going forward, and still contains some of their best work.

I listened to the whole album on YouTube and loved it! A great album from start to finish. And it's one of the last albums with Tarja.

Once is the fifth studio album by Finnish symphonic metal band Nightwish.

Highlights: Nemo, Wish I Had An Angel, The Siren

Very good album, the one that got me into Nightwish. Contains a lot of success songs.

This album always makes me feel like I'm on an adventure when I put it on; the whole thing is so dramatic, and I wasn't surprised in the least to hear it was made as part of a film project. The first half of the album is astounding, but it tapers off towards the end. I hope as time passes people can look back on this album as not only one of Nightwish's best, but one of the best albums of the era.

Highly underrated album. I know it deviates a little from their previous styles but it fits perfectly for the theme envisioned by Tuomas and overall sounds stunningly beautiful. Some didn't like Anette but I think she really shined in this album. Incredible work!

The constant genre flipping and experimentation may not be for everyone, but Imaginaerium contains enough good work from across the music spectrum to justify its placement here.

Why is this not number one? I get it, some didn't like Anette, but the written music is on a completely new level for this band. This one takes you on a Journey you will never forget! Best work since Oceanborn.

I love all their albums, but this album really means something to me. All the lyrics are very personal and relatable, with a dark nature to them. I love putting this album on when in a bad mood. Tuomas said this album saved his life, and it is currently doing that for me. Well, it's saving my sanity.

Highs and lows. With bold songwriting and the introduction of Anette Olzon, there's a lot of great material here. On the other hand, a lot of the tracks end up sounding quite similar, save for the standouts.

Every song is great!
Many songs of different symphonic metal styles expressed in this album.
Some catchy, some beautiful and melodic, most are both!

The sound of an angry and heartbroken songwriter getting it all out of his system. Unmissable

EFMB is by far Nightwish's best album. I did not like it on first play and you have to persevere with it, it definitely grows on you. What is surprising is it contains 2 things I dislike on any recordings, speaking parts & children's choirs. However I can choose to ignore this as Floor Jansens vocals are heavenly especially on The Greatest Show on Earth. Our Decades in the Sun is also one of the most beautiful songs I have ever heard.

Floor Jansen's addition makes this album entirely worth the listen. A concept album at heart, Endless Forms Most Beautiful is solid, but doesn't make too many strides musically.

All but absolute perfection.

Shudder before the beautiful, The Greatest Show on Earth, Edema Ruh, My Walden, Endless Forms most Beautiful, Aplenglow AND Élan all in one album!

The only ones might compare are Nemo, Wishmaster, Imaginaerum and Dark Passion Play.

all there albums are great but this is beyond fantastic

I normally don't like Power Metal but the way Floor Jansen sings the songs written by Tuomas just causes me to be so amazed!

A breakthrough in the development of Nightwish, Century Child contains better production and instrumentation than the albums before it. Combined with the unified sound and addition of new member Marco Hietala, this is a solid album.

Not only the best album by Nightwish... propably the best album of the 21st Century so far... all 10 tracks are masterfully composed, performed and written, there are absolutely no low point, no fillers. Furthermore, it was this album on which Nightwish created their distinctive sound they are known for nowadays.

This is the deepest, most meaningful work Nightwish produced. More so than any other album, these songs touch the soul of the listener. It a sad, but truly beautiful ride.

Highlights: End of All Hope, Bless The Child, Phantom of the Opera, Ever Dream

As the last Nightwish album to heavily utilize synths and voice layering, Wishmaster's sound is shaky at best. While the song list and Tarja's performances put it over Oceanborn, this is still far from the polished sound of later albums.

SMH... What is this even doing here? This should be the second, right behind Oceanborn... So dissapointed, geeez.

I mean, ok, ya, Ghost Love Score, nemo and Dark Chest od Wonders are amazing but, really? Once the second? , pf.

Master of albums. Sad it is so underrated.

There isn't anything specifically wrong with Angels Fall First, but it's very unfocused in terms of its sound. Far more acoustic, not quite as confident, it's an interesting time capsule, but not a great album.

Highlights: Elvenpath, The Carpenter, Beauty and the Beast

This album is so underrated. People just don't listen to it. It is awesome!

9 Over the Hills & Far Away

The Contenders
11 End of an Era

This album just makes me sing along with Floor and dance to Nightwish's music.

A shining new era of Nightwish, introducing a fantastic new vocalist that has bought a new sound to the band and flawlessly powers through every song of every previous vocalists eras

Its good but it isn't really a album...

Decades isn't really an album, just a collection of remastered hits. It's here by default because it's good for what it is.

15 From Wishes to Eternity