He has an unmasked variant and his display base sucks. They could have just gave us a brick wall or something else. I hate the base, it looks like he is watching a movie in his T.V. or something, but I like the figure and his size.

Not only massive but fantastic quality and very durable. I don't think I've ever owned another figure that is this durable, articulated and detailed in the same package. Maybe that's why I had to go out and get 10 of them! 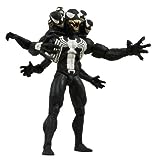 The sculpting of this piece is incredible. As well as the interchangeable parts which just gives it more flavor and the ability to display venom from different time periods.

Cool action figure, you can interchange even the backpack head to the main head, and you can put all the main head on its back pack. Interchangeable hands as well. 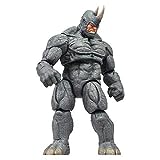 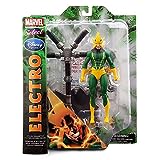 He has a great size that is perfect for the other smaller figures than him. Articulation
Is not that much as Marvel Legends but a great sized Red Hulk. He also comes with
A simple display base.

This is an epic action figure, he has the same display base with Red Hulk.
He will be great for the other small figures to make it really, really awesome.
Same articulation of the Red Hulk and was used for the Red Hulk, as a reprint.

Of course, as usual Deadpool comes with loads and loads of accessories. Some are permanent so you can't take them off. He has a great display base that has a brick wall. Deadpool really look awesome as how they did him in this figure.

Deadpool is and amazingly articulated figure. With a great paint job and great weapons. Plus it is DEADPOOL.

He does look creepy, but this is an amazing figure. He has a removable leg so you can put it in his hand and yeah his creepiness makes him amazing that you nearly
Can think he is a real zombie. Aside from being called Zombie, you can call him Cross-Spieces.

He is a wonderful figure. My thought is that this figure should be having a little ray of his beam or so. His base is not bad and so as his articulation. The detailing on this figure is tremendous. 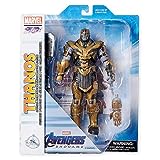 He comes with death and is my favorite marvel select figure. Fits perfectly in a marvel legends display

Gave us the Ultron we sorely needed, great articulation and fits well with a Marvel Legends display.

This figure is great, his angry face looks perfect and nice. He makes him look stronger and everything which is really cool and this is my favorite Sabretooth
Figure and there are tons out there in the world.

Very cool because his look is awesome and this is also a great Hulk costume and great for your displays so I definitely recommend getting him if you've always been collecting Marvel Select figures, this is definitely a"Pick Up"Happy Hunting! 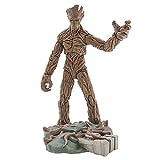 This Figure Looks Apsolutely Awesome,his accessories in the guns are sweet,the figures head scan is as good as the Hot toys! And his stand is just INCREDIBLE!

This is a great figure and he also has an unmasked variant so you have to buy two Magnetos to make him unmasked or not. He comes with a base that I don't find bad.
In his base Colossus's hand is out of his grave.

This figure comes with a removable skull and of course he comes with his shield and a display base like Zombie Spiderman which I forgot to mention. It was Silver Surfer pieces and so was the Zombie Hulk. 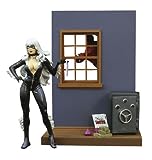