Counting down the 10 greatest ESPN 30 for 30 films one at a time.
The Top Ten
1 I Hate Christian Laettner 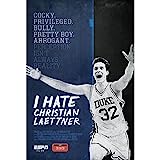 On of the most clutch NCAA basketball players of all time, this goes into the life of the former Duke player Christian Laettner, who crushed dreams of his opponents for four years.

Goes into the journey of possibly the most talented college football team ever, as the 2001 Hurricanes go on a 30+ game win streak that leads the the 2003 Tostitos Fiesta Bowl against the Ohio State Buckeyes.

5 Brian and the Boz

Narrated by soon to be Classic Rock Legend and Pistons fan Kid Rock. It's an excellent look at how the Detroit Pistons changed the face of the NBA in the 1980s with their take no prisoners defense and their wacky characters especially Dennis Rodman.
Its Joeysworld

Produced by MLB Productions, this film focused on the 4 games that the Red Sox won in the greatest comeback in baseball's postseason history, this occured in the 2004 American League Championship Series.
Its Joeysworld

This film was unique and exciting. it chronicled THE big events ALL in one day. The new York Rangers Stanley Cup Victory Parade, Arnold Palmer's final U.S. Open Golf Championship, Opening Day of FIFA World Cup 94, Baseball action, Game 5 of the 1994 NBA Finals AND most importantly O.J as a fugitive in a Bronco truck, what a film!
Its Joeysworld

It's NOT about the Buffalo Bills, it's about Bill Parcells and Bill Belichick and their time together with the 1986 and 1990 New York Giants, and apart as rival coaches.
Its Joeysworld

The Ultimate inside story of why Roberto Duran quit in his second bout with Sugar Ray Leonard as seen through the eyes of both fighters, a great boxing film.
Its Joeysworld

The story of the 1983 NFL Draft as seen through the eyes of Dan Marino and John Elway and through the lens of NFL Films.
A great study of every player drafted in the first round of this draft.
Its Joeysworld

The amazing story of Ric Flair, his party days and nights, his world championships, and his association with the Four Horsemen and his amazing 2017 recovery from kidney cancer. He was more than just WOOO! He was one amazing superstar.
Its Joeysworld

An amazing but sad story on SMU Football in the 1980s featuring talented players like Eric Dickerson and Craig James. But the team suffered its first death penalty by the NCAA.
Its Joeysworld

17 The Band That Wouldn't Die

18 Catching Hell
19 When The Garden Was Eden

20 The Last Days of Knight

This is one great story of radio's dynamic duo who paved the way for other great sports talk shows. The Mad Dog's famous rant on his beloved San Francisco Giants in 2003 (after the Giants we're eliminated by the Florida Marlins in the National League Division Series) was the highlight of this film.
Its Joeysworld

24 This Was the XFL
BAdd New Item