Amazon is everyone's go to company when you want quick deliveries, efficiency, and a trustworthy company (God, I sound like an advertizer). But, there are some extremely weird things out there, and amazon sells a lot more than you'd expect. So, here are the top ten funniest items you can buy on Amazon. Do note that the current date is Jan 29 2021, so this may soon be unrealistic due to some things coming on and off Amazon. Enjoy!
The Top Ten
1 Bacon Strips Bandages 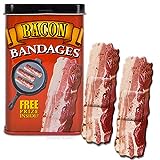 This is practically the stupidest idea ever. I don't know if these are edible or what, and I'm not sure which possibility is worse. You'll skin your knee, for example, so you put the bacon bandages on. Then you walk outside, and are immediately attacked by eagles, raccoons, geese, and whatever other crazy animals live where you come from. But, there's over 600 ratings and it leads to 4.6 stars, so these must be popular!

Wow. Someone likes bacon too much.

I don't see any problems here..

This will traumatize me for centuries. Imagine the craziest, stupidest swimsuit ever. This is stupider than that. Literally is ugly purple, looks like an ugly tank top that covers the nether regions as well, all while being ugly purple and with thanos's face shining bright and proud in the middle of your chest. Nasty. Well, at least it wasn't a bikini!

My eyes hurt, but at least Thanos's chin is in the right place.

Useless? Boy, I have no idea what you're talking about

This will never get out of my head

For any moms who are just fed up with their kids being on their phones 24/7, have no fear! The Mobile Phone Jail Cell is here! (Aaagh, I sound like an advertiser or salesman again!). It's exactly as ridiculous as it sounds. Literally a small jail cell with a lock, that can hold up to five phones in there for as long as the person wants. So hilarious! Maybe Diary of a Wimpy Kid has a partnership with Amazon or something, because in the 15th, there was one of these!

That is actually pretty funny, I could see parents using this item.

That reminds me of those butt pencil sharpeners.

This is exactly what it sounds like, again. It's literally a bathing suit which shows all your muscles, organs, and other body parts on a bathing suit! Imagine seeing that in the public pool! It's a walking biology session! I just had a scary thought, actually. What if my science teacher finds out about this and wears it to... classes... AAAAAAAAAAAAAAAAAAAAAAAAAAAGH!

The only thing this is useful for is making people around you uncomfortable.

My goodness, why would you even want to buy this lol.

Way to turn people off.

This is funny yet sad. You'd think these companies could have actually put thought and money into things like global warming instead of stupidly hilarious things like this.

HEY! This isn't useless, I would love to take my chicken for a walk, and they make harnesses for parrots, so why not chickens?

Who even takes a walk with a chicken? I've seen people do it with cats, that's pretty regular, but chickens? Really?

The buttress pillow! It's exactly what you think it is. Hilariously, it has extremely good reviews! People say it's extremely comfy! Add this to my Christmas wish list, please.

this would be so comfy

These cuties you can buy on amazon. Pretty funny, but I find them adorable. When I first saw this on Amazon I though it was an actual stuffed blobfish, but thankfully it's a stuffie.

Most people will go for teddy bears and other cute looking stuffed toys before buying this. That or body pillows.

I actually have one of these

It's just ten mini hands that fit on your finger. I don't know if it's a clever nod to Doctor Strange (probably not) or just a gag gift. Actually, one of my classmates surprisingly got this and wore it at school. But next time someone asks you to give them a hand, you know what to do. This package has a set of tiny hands for each of your left and right hands.

Other items on here are actually useful, but this...

so funny! I want to get it

I don't really need to say much else when it comes to this, but you can imagine how weird this would be. You won't be kissing anyone with this, that's for sure! At least I hope not...

No one likes pickles! I once saw a pickle soda drink on YouTube, for some reason those products exist. You can even buy canned burgers somewhere.

This is just completely useless.

Erm... imagine walking into someone's house and seeing this XD, it's like the designer just say one of those stock images and was like: "Hm... I could sell this... but as a physical object!"

it was suppoased to be old woman using wall decal

Is it useful or practical? No, but I just bought one and it has ears that go up and down and it's pretty cute so that's all that matters