Best madden game I love rebuilding in franchise or doing madden moments and it was the last madden with create a team!

The 5 on 5 and the special balls were very fun. I play the wii version and think that it is the best I have played

Madden 12 and Madden 11 were my personal favorites, but 12 gets a slight edge.

Best because of the great teaching aspect. The Create-a-Player/ Team is the best EVER because of the variety and realism of player faces.Franchise Mode is addictive. This game should seriously be re-made for Xbox One.

Great Game, the birth of EA sports radio, which I like very much. How can it not be number 1. The newer versions have too many new gadgets which make it confusing to play.

Best overall Madden, besides you, can build in all the drafts and even build a team in college and then import it to madden 05.

Superstar mode was great around this time, it was nearing its peak hear, including franchise mode AND create-a-team was still a thing!

Smooth, fluid and easy to pick up and play. I've played a lot of Madden games in my time, but this has to be the best one in my opinion.

Maybe it's my childhood bias, but whether it be the in-depth create-a-player or franchise, this game has not been topped.

Looked like a great game but I didn't get the chance to play it because the disc didn't work when I first got it.

It was my favourite game growing up, and although Madden 12 was a much needed improvement, it was also when EA decided to introduce Ultimate team which is just the worse.

They say Madden started in 1988, but that isn't possible because history started in 2007 with the release of Madden 08, the holy grail of both Maddens and 08s.

Madden 08 transcends time and genres as the best video game ever forged by mankind, hell, maybe the greatest achievement to grace this universe as we know it. 8/10

My personal favorite Madden. Franchise mode was fantastic. No other team has played like like 2004 Atlanta Falcons. Roll out and throw a deep pass or tuck it and run for 20+ yards with Vick, it was so hard to defend against but it was possible.

Playmaker controls were a great addition. Plus owner mode was loads of fun

This year played FAST and you could block kicks!

Spent so many hours on this game, played Franchise Mode for 27 seasons and didn't buy another Madden until Madden 13.

Actual great graphics for its time, soundtrack is straight fire, truly reflective of how amazing the NFL was

My very first Madden game ever. This game introduced me to football in general, and has been my favorite sport

I love how easy the menus allow you to control Teams, Coaches, and Players.

This Madden just feels faster to me. Faster players, faster gameplay, faster games in general. It didn't have those weird arrow things and Connected Franchise is extremely fun. You can control up to 32 players, and retire at the right time instead of staying in the game forever. Say your old player retires and you make a new one. You don't start from the beginning, you start from where your previous player ended! I got all the way to 2029! (In very very late 2017.) I played Madden 12 and it is no where NEAR as good as this one. This should be number 1 and Madden 18 number 2.

I think EA got it right with the precision modifier juke. The running game can be very dynamic when playing with elite playmakers in space. Maddens after this date took a different approach to how the game engine operates but I loved this edition. EA got it right this time.

The best madden game to date. Just feels super fast compared to the other ones and the canton greats are a great addition

Best madden game in the 20 years I've played the game. It doesn't even come close.

With Better Graphics. Better Gameplay. And Better Updates.
This Game is One Thing Better.

New defense features and mechanics allow fans to confront their rivals with an arsenal of new pass rush moves, new open-field tackling mechanics, two new defensive cameras and more. For the first time, you can determine exactly when the ball-carrier is in your tackling range, and choose either a conservative tackle or try for a high-risk, high-reward aggressive take-down. Further, new mechanics to jump the snap, cajole blockers off-balance and disrupt the backfield make it more interesting to play as a defensive lineman or blitzing linebacker. What's more, enhanced defensive AI means that your teammates will better know their assignments and be in position to make a play, allowing players to be more aggressive, with the knowledge that their teammates have their back. This Sure Will Be The Greatest Madden Yet Besides It's Madden season once again, and there is now a reason to celebrate.

It's more realistic than all the other maddens. The referee's make better call's. The graphics are better too my favorite game ever.

This game is awesome!

Was the best Madden in all aspects, the Franchise Mode was the most fun to play and I honestly wish I could still play this game now. It was so fun and I played it for years after it was out.

This game the best franchise mode in like history. Also including the extra point. And a simple passing game and running game so in my opinion this the best Madden game.

TBE make all madden games like this one game play, franchise mode, all you have to change is make banners for championships.

While it has been many years, the gameplay seemed more realistic than many other years...

Creativity and gameplay was awesome. Hit stick! If you played franchise mode long enough, teams would go bankrupt and were relocated or replaced with new ones.

I think this year has the best graphics and the realest to football than any other year.

Best video game of all time. Superstar mode was amazing. Nothing tops this game.

This game was by far my favorite, the franchise mode was so in depth with position battles and nfl players dislicking or liking what u are doing. Playing as a player is great being able to pick your agent and able to talk in interviews

I never played it

This Madden has exciting players, draft champion, and other unique stuff in the game. One of the best Madden games of all time.

The movement in this game felt smooth and the controls were nice, This was the most fun madden I've played and I've been playing since madden 12 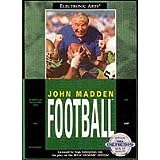 The original is by far the best because you can actually do stuff. It is a video game after all. I know the other ones are more realistic but this is more fun because you actually have a lot of control over your guy 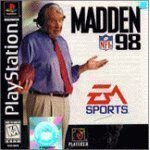 I had this game in my Sega genesis it was so fun because it feautured the 8 best teams ever at the time, like the 72 Dolphins, 85 bears, 78 Steelers and so on. An all time favorite.

Huge graphics improvement. I feel like madden would really benefit from a story mode like the one in 2k.

Good one. Longshot is fun.

Last year using Ignite engine. I feel it's smoother and less crappy than 18 and on.

Simply the most balanced gameplay. Ultimate team at it's best as well.

I think ea finally figured it out after 5 years of bad games. First good madden since 12

Only one I have

I think madden 20 is the best madden because of the quality and because the x-factors and overall I just think it's the best.

Huge improvement and hasn't been so much fun in years!

In my opinion this game is the best on PS4 for me and is really addicting.I got it for 25 since it was on sale.

Just saying it should be number one...

One of the worst all time, period!

Amazing game took a lot of risks and it worked great game. My faults on it: No practice mode MUT,training points to stingy,more player upgrades,to many big hits overcompensating

I played this game, and immediately wanted to get rid of it. Played Madden 06 later that year and I loved it, but the game broke right after my first game.

The only good thing about the new Madden NFL 16 is that it brought back the good soundtrack that Madden NFL 13 took away.

The cover looks cool and it really is easier too kick returns but I don't know why people buy I then give it back to Gamestop.

This was the best madden ever. Why so low? 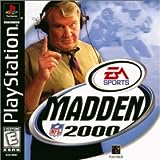 Best time ever playing it with my dad! He'd run up and down the field with Barry Sanders and destroy my cowboys, he'd let me punch him, I was so mad but now it's funny, fond memories and creepy madden teeth!

Bedt MADDEN ever in my opinion. 5 on 5 was great, and my favorite player was on the cover. Love this one the most and probably always will!