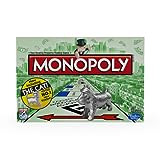 Monopoly SpongeBob sounds nice, but the classic Monopoly is WAAAYYY better! There if fake money in this game and you could get bumped out or go to jail for a while, Monopoly rocks!

Come on people! This board game is a classic. You get to own many houses and when someone lands on your property, they pay you!

Absolutely the best. I'm just not very good at it.

The classic version is usually the big deal.

The most sophisticated and sleek version.

Not as long as other monopoly games

Build your tower and win! Most addicting monopoly game.

Wow so amazing the best version of monopoly game

Wow! This is so I don't know what to say about it.

This rocks! I played it when I was younger and it was great.

Surprisingly, a creepy game of Monopoly.

Play it with my sister and wasn't really good but it's ok.

A war version of Monopoly, wow!

It is so fun and also the best monopoly version ever!

Is this any good? I have it but haven't played it yet.

This one is super fun

This is what I have.

It is so awesome, you should play it.

One of the only playable versions of an otherwise horrid game that taints people's perceptions of board games. It has an accompanying DVD, gives your player characters unique roles, gives players properties from the start, and there are way more things that you can build in this game as well.

Seriously, the majority of games on this list are rehashes of regular Monopoly. Forget those, play this!

This is far better than the original!

It is electronic and has a calculator