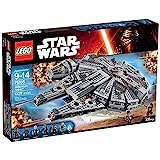 Honestly, the most realistic lego set ever made.

The most realistic Lego set.

The greatest Lego set ever!

I love the Milluneun Falcon.

A classic trilogy ship in Lego has to be number one

Slave One is awesome. Should totally be number two.

It is a great set but it should not be higher than the Milenuin Falcon.

It's huge with unique characters.

It's mini figures are amazing.

Kit tiin and saesee kolar and mace fisto and agen windu, not to mention senator Anakin palpatine- so good

The Death Star is not that cool.

It's the best ever!

The new one is cool. They have not made a new Slave one yet.

It has storage compartments, many weapons and is huge.

The gunship is awesome.

I have every single set in the top 25

15 minifigures, that is crazy

Comes with lots of characters and is huge.

I've never been so happy in my life when I first bought this.

It is huge. It also comes with rare mini fingers

Are these all Star Wars? Anyway this is a good set...great for imagination and a challenge.

A great Lego set. It has rare minifigures.

It can fit 6 people in the cockpit.

I have both Jabba’s Palace and the rancor pit, I love how you can combined the two. Jab A’s palace has so many exclusive characters and iconic locations from episode VI. I love the amount of playability in this set.

Finally we got the 501st Battle Pack!

It is awesome. I have it at my house. There is a cool glider for the ewok and the AT ST is bigger than it looks.

This set is so cool. It should be infront of The Republic Frigate.

Comes with an AT ST Speeders and rare minifigers.

I love this set. it has great originality

It can carry 16 droids and comes with even more. That is out standing.

It has a good design and good minifigures. It has a affordable price

It is good maan

It’s over 3k pieces, four feet long and thirteen inches wide. That’s all I have to say.

Rare mini figures lots of missiles and it is huge.

this should be in #1 because it is an awesome set to have and is is fun to build the one.

It is awesome. A drop ship carrying a walker, that is cool.