Wii U Games You Would like to Rate Most

On my previous list I talked about Switch games. But now we have its pathetic less successful predecessor the Wii U while it ended up being a colossal failure and disappointment to us all there was quite the interesting library of games on the system. So yeah feel free to add anything. The good the bad or anything in between. Honestly looking back some of these games are good but even they look rather mediocre and pale in comparison with their Switch counterparts. But let’s talk about them anyway
The Top Ten
1 Super Smash Bros Wii U

While Ultimate puts this game to shame it’s still respectable in its own right. Overall solid character selection and stage selection. There’s fun to be had here both on and offline there’s enough here to keep you interested and this Game’s graphics look amazing. However I wish there was more for solo players and the Amiibo/ Custom moves could’ve been better. But I feel this is where the Smash community really took off. Overall a solid game all around 9/10

Perhaps the most unique new IP. Splatoon takes the first person shooter like Call of Duty and completely turns it upside down. Instead of kills this game focuses on covering the most ground. There’s several stadiums and rankings for players to compete. On top of that there’s new weapons and clothes to unlock. There’s even a single player campaign which is short but gives you something else to do. Overall this is a pretty interesting game overall. 9/10

Honestly this game is amazing. The fact Nintendo gave us a game where we can make our own levels and play other levels worldwide is incredible. There’s so many options available to customize your levels and make them truly insane. I just wish there was more options because they definitely could have made more
9/10 for me

8/10 The sequel was better but this is nice too. 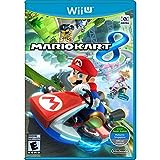 7/10 I love the tracks and graphics, but the battle mode, roster..., yeah Deluxe is the way to go honestly

While overshadowed by its Deluxe Counterpart Mario Kart 8 was truly innovative in its own right. The graphics were amazing. The music was amazing And quite honestly there wasn’t a bad track at all every single one was fun. The DLC was awesome and the online was great. However there was also some issues more than just minor. The character Roster leaves a lot to be desired with over a third being baby metal or Koopa characters. And a certain character we don’t speak of. Then there’s the battle mode or rather lack thereof. Because that’s the most pathetic mode in the game and the worst battle mode entry in the entire series. Those things are frustrating issues that bring down an otherwise excellent game
8.5/10

Honestly I feel like not enough people talk about this game. Tropical Freeze has great presentation that’s well polished. It's packed with subtle detail and vibrant visuals, and a great soundtrack Plus, three different Kongs you can partner up with--Diddy, Dixie and Cranky--each have a unique ability, providing some variety in the way you approach each challenging obstacle in your way.The game is tough, but it's difficult in a good way 8.5/10

Not the Biggest Bayonetta fan but this game seems to be critically acclaimed as one of the best action games out there. I’ve played it very little honestly but the graphics were amazing and so was the soundtrack and it’s a really high quality game all around if you’re into hack and slash games I would recommend this 9/10

This might be the best Pikmin Game yet. For starters the environment looks vibrant and realistic almost. The game allows you to go at your own pace and there’s always something to do. The fact that you have 3 captains to work with is really cool and allows you to divide and conquer different tasks. It’s a relatively short game but still fun to play 8/10

Nintendo Land is actually a pretty interesting game with different attractions based on certain Nintendo franchises. Kinda like Wii Play in a sense. This game is nothing much more than a Minigame collection some are actually pretty fun while others not so much unlike most minigame collections this one has a little hub world to interact with. The theme park idea is genius and makes it stand out from any other Minigame collection with a generic menu. It also actually utilized the game pad well and multiplayer here is a blast. 8/10

7/10 Again it's just good. It's better in terms of level design than the other NSMB game

While it’s a New Super Mario game and lacking in originality it’s still Mario at its core and it can be fun. There’s some new ideas but nothing that groundbreaking. The acorn suit is a nice power up. The baby Yoshi’s are cool but they’re only like a 2-3 level thing. Luigi U I honestly prefer to the main game otherwise it’s pretty uninspired especially considering this was released only a few months apart from NSMB2. Honestly it’s a 6.5/10

7/10 Imaginative levels and a nice roster for a mainline game, but it had been better if it were less linear. Even though this is the closest thing we'll probably ever get to a Galaxy 3.

Super Mario 3D World is a sequel to 3D Land on the 3DS. While it’s good for what it is I don’t think it’s good enough to be a stand alone 3D Mario game. It doesn’t hold a candle to 64, Sunshine or the Galaxy Games. This game looks great and overall it’s the perfect game for everyone to play and enjoy and have fun. The level designs while interesting aren’t open world. This game is enjoyable but it’s not a true 3D game and definitely not what it’s made out to be by most reviewers. Realistically it’s a 7.5/10

10/10 Gotta say the only game I so far have "loved" on the Wii U. I love the yarn theme and have some memories from this game.

7/10 It's the worst of the modern Mario Parties (excluding TT100 and Super, both of which are pretty bad), but it's still a little fun. The bosses and minigames were great and the boards were fine. But where's my story mode and side stuff? 9 was waay better