Nintendo has always been known for their phenomenal platformers, so today we will look at the Top 10 Best Nintendo Platformers of All Time. I'm not going to include remakes, since that's just lame. Sequels are fine though. However, you can add remakes if you'd like. Anyway, let's do this!!!
The Top Ten
1 Super Mario Galaxy 2

The main reason why I put this game over Super Mario Galaxy 1 is because, well, I don't want to be biased, since this game is objectively better, and I grew up with the original, and I honestly enjoyed it more, but I think it's just nostalgia, so I put the sequel above the original. There are much more stars, and you can ride Yoshi! There's also some new power-ups I really like, such as the rock mushroom and the cloud mushroom. With the rock mushroom, you can smash right into things and destroy them! And with the Cloud mushroom, you can make up to 3 clouds by shaking the Wii remote! The cloud mushroom can be helpful for getting to hard to reach places occasionally. There's more 2D sections in this game, so that's a plus. I don't like Lubba though, he's not very interesting. Also, just listen to the Fluffy Bluff Galaxy music! I recommend Super Mario Galaxy 2 to absolutely anyone. I'd rate this game a 10/10.

Alright, now I can talk about the original. As you probably know, this is my favorite game ever. I love the gravity gimmick, the music, the hub world, everything! It also has one of my favorite songs in any video game, Good Egg Galaxy! I love all of the power-ups in this game, especially the Bee Mushroom, even though I hate bees. With this power-up, you can hover in the air, and climb up honey sticking to walls! The difficulty is ideal for me, not too hard, not too easy. There isn't much else to say about this game, just see for yourself. I'd give this game a 10/10. Super Mario Galaxy has tons of replay value.

This game is amazing! The graphics are colorful, and one of my favorite part of Mario's moveset is introduced in this game, the spin jump. With the spin jump, you can bounce off of things you normally can't, such as hotheads and piranha plants. You can also destroy bricks with the spin jump. Let's not forget about everyone's favorite green dinosaur, Yoshi! Super Mario World was actually the first main series game to feature him, if I am correct. With Yoshi, you can eat Koopa shells, and each shell has a different effect. For example, Red shells make Yoshi breath fire, and blue shells make Yoshi fly. There are also many secret exits in this game, and you have to do some thinking to find them. My only criticism with this game is that the controls aren't the best. This game is still amazing though, and I consider it one of the best Super Nintendo Entertainment System games. I'd give this game a 9/10

Oh yes, who could forget this? Super Mario 64 was revolutionary for its time, and it expanded Mario's moveset massively. The long jump, wall jump, and others were introduced. The level design of the levels are pretty solid, and who could forget the music? My problem with this game is how broken it is. Seriously, you could beat this game with 0 stars if you wanted to! Also, bosses are often reused for other stars, with little difference at all. Like, you have to fight big bullies for seperate stars! And yes, the one in snowman's land does count. Despite all of this, Super Mario 64 is still phenomenal, and gets all the praise it deserves. Maybe a bit too much, though. I'd give this game an 8.5/10.

Great, we're back to Mario again, woohoo! How good can Mario games get? Well, that's up to you now! As the title of the game suggests, this is the sequel to the game Super Mario Maker, in which you make Mario levels you can share with the world. You can either post bad levels with no effort put into them, or you can make phenomenal levels that you put your heart and soul into. It's all up to you. There's a lot more tools for you to work with than in the original game. There's also multiplayer now, which I love! Let's not forget about the night themes. They add new effects to your level, which depends on the style of it. They also added 3D World, which is much different than the others. My complaint with this game are some of the changes and lack of things. For example, you can't stack pipes anymore, there are no one-way walls, and you can't even place things near the start of the level! What's the point of that? Also, some things are locked in certain themes. For example, you can only ...more

Finally, I was starting to get a little tired of Mario. Let's take a little break from our favorite Italian plumber, shall we? Kirby Super Star is one of my favorite games. There's just so much content in this game! The partner gimmick is just awesome, and I want to see more of it in future games. The controls are also very easy to figure out. Don't forget about the music, either. Seriously, Nintendo music is so good! My only complaint with Kirby Super Star is that one of the minigames is pretty lackluster. Megaton Punch is pretty good, but on the other hand, Samurai Kirby is not fun at all. It just feels 50/50 when I'm playing with a friend. I also wish there were more minigames. Overall, I'd give Kirby Super Star an 9/10.

I LOVE this game. The Robobot gimmick is pretty cool, the music is amazing, and the lore is surprisingly dark for a Kirby game. The gameplay is still the same as Triple Deluxe, and I'm fine with it, honestly. Collecting the Code Cubes was tough, but still pretty fun. Like most other Kirby games, the game has a True Arena, a boss rush of the hardest bosses in the game. I love playing the True Arena in this game, I keep trying out new abilities (by the way, the abilities in this game are pretty solid), trying to see how well I do with each one. When I saw the true identity of Star Dream, my jaw dropped. The soul fight was one of my favorite fights in any Kirby game, and one of the hardest. This game has lots of replay value, and I don't really have any problems with it. I'd rate it a 9/10.

This game is great. It's your typical Mario game, but without power-ups. Instead, we have Cappy! With Cappy, you can make insane jumps, activate timers, and even possess enemies! Each capture has its own moveset, so experiment with other captures! One criticism with this game I have is that it's way too easy: dying only makes you lose a few coins, and you basically have infinite lives. Also, it can get boring after a while. Despite that, the gameplay is great, The graphics are nice, and even the music is amazing! I definitely recommend this game, and I rate it 7.5/10

I really like Kirby's Return to Dream Land. It's perfect for playing with friends, its music is some of the best Kirby music ever made, but the level design for some levels, at least in my opinion, is bland. The super abilities are very disappointing though, and there isn't that much replay value that this game offers, and you have to beat the game a second time, but it's just harder. There's no special character, nothing. However, most of the levels in this game are pretty solid and have a bit of replay value. I'd rate this game a 7/10.

This game is the start of a solid series. Baby Mario and Luigi are being brought to their parents by a stork, but problems start to arise. In this game, you try to return Baby Mario and Luigi to their parents. The egg throwing gimmick is weird, and the game feels bland at times. I don't know why I think it's bland sometimes, and I wish I did. Baby Mario's crying is very annoying as well. The level design, graphics, and music are all pretty good though. I'd rate this game a 7/10.

This game is a nice twist. It's like a normal 2D mario game, but it's 3D. The level design is great.

It's not exactly a platformer like Super Mario or Kirby, but it's still one of the best games ever nevertheless! 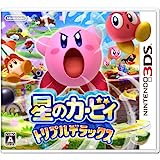