The Percy Jackson series by Rick Riordan is the best series ever behind Harry Potter in my opinion. What are the best Percy Jackson books?
The Top Ten
1 The Last Olympian

This deserves #1 place. It talks about the prophecy, battles, and it developed Percabeth into what it is now. The Last Olympian talks a lot about Percy, Annabeth, and Luke's background. This is heartwarming story, narrated by a humorous character. It's so descriptive that you can feel what Percy's feeling; pain, love, determination, frustration, anger, confusion, everything. The book has an ending that makes you want to cry and smile at the same time. Cry because the beautiful series is over, but laugh in joy as you know the next series is out and Percabeth. The fight scenes seem like you're watching them as Percy journeys to defeat Kronos. One of my personal favorite parts is when Percy calls to Blackjack and lands safely on him, but his voice turns a higher of an octave and makes you want to laugh. This book ultimately makes you feel proud of the beloved characters and makes you want to cheer and breakdown laughing, crying, smiling, growling, spilling out all of the emotions The ...more

I have read all of the books included in the "Camp Half Blood Chronicles," and no one beats "The Last Olympian." It is Rick Riordan's masterpiece of all time. This book gave the responses to the unanswered mysteries in the previous books. I love how this thrilled me to the end.

This is the best of the series. I feel like they got better as they went along. Probably because the fights could be better as Percy got older. There was bravery from everyone and it also left a good cliff hanger for the Heroes of Olympus series which was really good.

It totally ties in all of the mysteries from the other books. This is my favorite book, and I wish I own it. I am glad Rick Riordan is making another series about Demigods. I love this book!

The Titan's Curse has some good morals and values weaved between the story line. This book has a lot to say about loyalty, friendship, family, trust, courage, sacrifice, and more. Some of the characters grow, not only in their demigod training, but also by learning from their mistakes and learning to do the right things. The book is filled with rather clean humor that is both funny and witty. The book shows how strong friendships are hard to break and good friends are hard to replace. But it also says that should always keep in mind to never blindly trust someone as people change over time. When we face different situations we should not wholly prejudice something because things may not always be as they seem. Life is a surprise; we never know what may happen. But whatever it may be we always have a choice and to choose right is in our hand. The Titan's curse has displayed gender equality. Most of the times we see that there are more male characters in a book rather than female but ...more

This book is boss. Humor, brilliant characters, and awesome plot. Plus, in my opinion, it includes the best battle in PJO and fiction in general. Thalia vs Luke. You could feel it, the pack it punches on both characters as they battle it out in a beautifully orchestrated way, showcasing the power and emotion from the former friends. Luke was snarling, Thalia was grieving, and though they showed it in different ways, they both felt as though they were betrayed, the feeling heavier when you consider the impact of Thalia's initial sacrifice. And the part where Thalia defeated him, and Luke used her hesitation to make a desperate grab for her spear, triggering her reflexes/instincts so that she kicked him off the cliff? Amazingly written. Well done, Rick

Introductions to so many great characters. Nico, Bianca, Zoe Nightshade, and Thalia(I know she technically starts in sea of Monsters but that wasn't much of an intro). The story was awesome between Bianca and Nico being revealed as children of Hades to Thalia taking over as lieutenant of the Hunters. So many important moments throughout the book not to mention this was the actual beginning to Percabeth.

Again, I mostly like this book because of Nico. It's where our little bro is introduced. Bianca is also an amazing character. I like this book for so many reasons, I can't even say all of them without writing a whole new book!

3 The Battle of the Labyrinth

Sorry but this is easily the best book of the riordanverse! There's enough lightheartedness for it to be suitable for new PJO fans, and those of us who've grown up with it and are rereading them for like the millionth time! It's serious, but I'm a good way, there's humour, and we have the sanctuary of early percabeth moments that are intense enough for us to consider them actually percabeth. Also, we get the whole Rachel vs Annabeth/Percyisconfused and Grover Underwood! To top this whole thing off we have Hera being a jerk and who doesn't love to yell 'You Smell Like Hades's Underpants!' At Hera when she's being a jerk?!

This is a flawless book. The best thing about it is how dangerous it feels. Rick Riordan stretches the book and the time they spend in the battle, which only adds to the adventure and makes it seem more real and dangerous. The fight at the end is far better than the Last Olympian, with the excitement well and realistically done. The Last Olympian's one flaw is that the fight is dragged onto the whole book with nothing much else going on - Plus, for a FINAL battle, it doesn't have much excitement, either.

The house of hades and battle of the labyrinth are my favorite books. The battle of the labyrinth is awesome because the book has so many good twists. Like when Quintus (sorry fro spelling errors) was secretly Daedalus, the creator of the labyrinth. I was also very happy for Annabeth because she got to lead her first quest. Also the character Ethan shows his first appearance in this book as well as Calypso. I also liked how there was an appearance of Hephaestus and Hera. I felt bad for Miss O'Leary the hellhound because her master died. I also loved how they visited the ranch is so called Texas. The ranch had flesh-eating horses. Also Nico met his ghost friend King Minos in this book. Sadly the god Pan dies in this book. But anyways this book is awesome and I love it

The Labyrinth is definitely the best book of this series, however, because it is most memorable one out of all of these I've read. And to support my opinion a bit more; its been a while since I have read this series. And you know how you read them in order? There's nothing I remember from the book ahead of this one. So that's how I am sure. This book was just wonderful and you have to read it!

The book is a great start to the series! Everything is so well well put together! The best part in my opinion was when they stumble into Medusa's Lair, I had the feels! This book was the one that made me want to read more and more! WAY better than the movie and I would recommend it to anyone who is looking for a good book!

I've never been into the demigods and gods until I read the series and now I love them! Anyone looking for a good read, I'd check out this series! I would place this 2nd in my list behind The Last Olympian! Great book.

I love this book. It's the book that started it all! So brilliant and amazingly written by Rick Riordan. Anyone who doesn't like this book (or the series in general) should work as a slave for Hades and suffer!

I recommend the PJ series to anyone who doesn't like reading. The book makes reading fun and educational. My second favorite book is The Lost Hero

This is the book that made me really like to read. That was back in 5th grade when I was 11. Now I'm a sophomore in high school and I just finished reading the Son of Neptune (which is really really good also). These books never get old and will stay with me forever.

I think this should be second. My opinion. I love this book it had a lot of detailed, but I still love The Last Olympian. It has a great beginning and a great ending. I loved this book!

5 The Sea of Monsters

Underrated. It's the only book where I feel Percabeth actually has chemistry, and it's short enough that you don't get bored too fast

Sea of monsters continues the action packed adventures of percy jackson started in lighning thief. Entertaining and a worthy sequel.

Because this book remember Tacica - Newsong of the maritime theme, every time I read (3 billion times) I remember of this music.

This is by far my favorite PJ book. I mean, I've only read the original 5, but out of those, this is my favorite.

I loved this book! Percy is a FANTASTIC character and is pretty hilarious when talking about the Greek gods. Should be higher on this list.

It's an amazing story of the important myths of the gods, the twelve olympians, the titans, and even before them!

A funny and humorous way to retell myths of Greek legends.

Plenty of humor and storytelling to make this 100% Riordan.

I loved it. An amazing spin off of each tale, he even made the long, boring story of Heracles interesting!

I liked the myths about greek gods well some of it was real but I liked it explaning greek mytholigy.

8 The Hammer of Thor 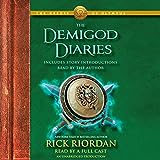 This book mixed Greek demigods and egyptian magicians together. How great!

When I read this, I was like, Percy has been through all of Rick Riordan's series!

I love this book

The Contenders
11 The Mark of Athena

It's about the 7 coming together you get to meet new people, travel to Rome and a bunch of other cool things. Plus Annabeths point of view anyone

12 The House of Hades

13 The Son of Neptune

Guess who's back. Percy's back.

I loved the files

I loved HoO. Great start to the series.

17 The Blood of Olympus

WHAT!? How is Blood of Olympus Last?! I know people will hate me, but I liked HoO better. The finale was great to