The Top Ten
1 The Day After Tomorrow

I want to work in Geography because of this film. Amazing. I am literally the biggest fan of this film ever.

Definitely one of the better films in the "disaster" subgenre.

This movie had a really interesting plot.

It's the "mother of all disaster movies" as the late, great Roger Ebert said. As a movie it's one of the best of its kind and a really entertaining ride from start to finish.

I downloaded this on iTunes not long ago.
When it came out in cinema's I missed it and was looking for it everywhere

Ending scene is best!
It should be #1
That's my birthday at novembet 13th
Release date!

This is a long time favorite of mine.
I wish I could have seen it in the cinnema but I was 1 year old when this movie came out.

Great movie, couldn't keep my eyes off the screen.

No movie and mean no movie has ever made me unable to explain how amazing Titanic is. James Cameron has made a movie so well made and unforgettable as Titanic. Dicapreo and Winslet played as some of the most memorable characters in motion picture history and will never be forgotten, and I mean never.

Titanic is so good because the story and acting. It shows very much of titanic.
Just see the movie and you will understand what I mean.

Highest grossing movie of all time, ingeniously written, beautifully performed, skillfuly acted, engaging plot, unforgetable moments, shocking special effects, beautiful music, expert cinematography, a strong and thought provoking message about class discrimination and arranged marriage, brings history back to life and, on top of it all, had something no disaster movie has been able to include before or since, CHARACTER DEVELOPMENT!

This film is well written and really lets you connect emotionally with the characters. It has some quite emotional scenes and that's even before the comet has hit. Unlike other disaster films, the audience is not invited to revel in the end destruction, instead it is invited to experience it from a real-world point perspective as if it was actually happening and you were stuck in the middle of it. Amazing film.

I have this movie on dvd.
I love it.

Literally one of my favourite films of ALL TIME. The Rock is amazing in it

I'm sorry but this movie should be number 1. This movie is the granddaddy of all modern disaster movies and it's still best! The Towering Inferno should be a close number 2 on the list.

An absolute classic. Should be higher on the list! How is Category 7:end of the world above this?

By far the best disaster movie, you don't see Bruce Willis any better than in this. It's a action, heart pumping movie with a sad tearful story. Everything that you could want!

It has everything you want in a movie, story line, action, romance, humour, great chemistry amongst the awesome cast, love this film

Ah yes, good old WWZ. An unforgettable story about dozens of relateable characters telling their stories during a fictional zombie apocalypse scenario that goes into surprising detail about the economic, geopolitical, social, religious and even environmental effects of such a scenario.

Oh wait, that's the BOOK WWZ! You mean the movie about Brad Pit crashing planes and dodging explosions to save the world from a bland generic zombie infestation that lacks any character development whatsoever and was so bad that even the author of the original work publicly stated that it was a piece.

I love this movie. I've seen it a bunch of times and it never gets old.

Next to twister and deep inpact is this also a high favorite.
I love this one.

Seriously? This movie ranks below category 7 and deep impact? Did you see this movie? It needs to be near the top of your list...in your top 10 at least.

I would rate this movie at the top of the list emotionally very powerful movie. realism too close for comfort.Brilliant 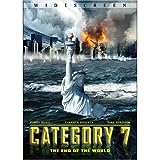 the effects may have been fakish, but this movie (for a TV miniseries) is really awesome. I bought it on Blu-Ray instantly once I knew it was available on it.

The remake is a success, and Tom Cruise has great acting. It really shows the emotion and fear of the movie. I still fear tripods coming out of the ground.

This is a great remake