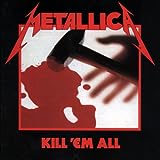 I wouldn't call Kill 'em All "garbage". It's a very good album that helped popularize thrash metal. But I agree that Alice In Hell by Annihilator (1989) is a better album than Kill 'em All (1983). For 6 years thrash evolved a lot. Even Metallica themselves got better on their next albums. - Metal_Treasure

Oh, please, Alice In Hell by Annihilator DESTROYS Kill 'em All, even Killing is My Business is better than this garbage, please, Seek and Destroy is a terrible and boring song, the solos are boring and the only good songs are Phantom Lord and The Four Horsement. I can't believe that people thing this is a good album, as I said before, Annihilator firsts 2 albums are 100 times better than this overrated garbage, and The Legacy and Bonded by Blood are better too.

2 Killing Is My Business... and Business Is Good! - Megadeth

Megadeth, even with this initial lineup, are superior to Metallica for one reason: Dave Mustaine. The riffs on this album are not generic, repetitive, simple power chords like kill Em all. They are complex, intricate, and most importantly, groundbreaking. Nobody was writing like Dave. His riffs hooks and melodies set the foundation for thrash metal, period. - Mike777

Heck of a lot better than KeA.

I bought the original 1985 cd of KIMB and was not impressed at all. Mostly because I couldn't hear anything. It just sounded like muddled up garbage as a result of poor production sound quality. The 2002 remastered version really cleared up the sound so you could actually hear all the ridiculous Mustaine riffs on display. The 2018 is even better and shows you how unbelievable Gar Samuelson was.

Most people will vote for an album because it's their favorite band, but not me. Personally, my favorite band on this list is Metallica, but The Legacy is just better than Kill 'Em All, as good as it may be - dlbk03

Apparently this was one of the albums that inspired Megadeth to make "Rust In Peace". Dave Mustaine was so impressed with "Alice In Hell" that he even asked Jeff Waters to join Megadeth during this period, but Jeff declined as he wanted to stay in Annihilator.

I think this is one of the three bests thrash metal albums with Rust In Peace and Reign In Blood, just listen to Crystal Ann/Alison Hell and Human Insecticide.

Come on, this is better than Kill 'em All and Killing is my Business.

Kill 'em All is the best, but this should go second. Killing Is My Business... and Business is Good should be 3rd.

The album that launched the Bay Area thrash metal scene!

The greatest of all, deserves it 100%

Heavy, raw, and brutal. It features their drummer singing which is very unique, and it's just a complete riff-fest. It's certainly better than Show No Mercy, which still has lots of NWOBHM influences, whereas Endless Pain is pure, heavy thrash.

8 A Fistful of Metal - Anthrax

There is no better debut album and more being teenagers

14 Doomsday for the Deceiver - Flotsam and Jetsam

Thet's death metal not thrash
seven churches COULD be here

23 We Have Arrived - Dark Angel