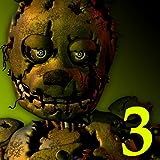 The gameplay was repetitive, the characters were literally copy and pasting the ones from Fnaf 2 and changing their color schemes to yellow and green, and overall was very bland and not scary. Definitely my least favorite Fnaf game out of all of them. - LilRose 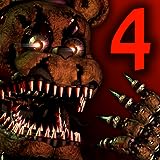 What do you expect? Its supposed to be creepy! - Datguyisweird666

Disturbing, creepy, and hard, but honestly people do have a reason to hate this as the whole vibe of being IN THE PIZZARIA was diluted after 3 and nobody knows what this is. However, the scare and game mechanics ARE REAL! - HYDRAflash

I know it would be dumb for me to say that in this FNAF game all you do is check parts of your room, even though most of the FNAF games are just closing doors and checking cameras, but FNAF 4 IS JUST CHECKING PARTS OF YOUR ROOM! Sure, the jumpscares are an improvement over FNAF 3's and once again there is good lore, but the basic game is just so boring and broken! - tacoperson

What do you mean? This one was WAY better than Fnaf 3 and 4. - LilRose

In my opinion it is the best. It wasnt overdone thanks to the fact that it wasnt mainstream, and the simple (but not too simple like fnaf 3) design worked, not to mention it had tons of replay value (though not as much as 2) - HYDRAflash

This one was really good WHAT DO YOU MEAN? - LilRose

This is one of the worst so it should be higher than 4 and 1. It was too stressful and it was rushed. - DCfnaf

Definitely the most replayable and player friendly, which is bad for die-heart FNAF fans, but no hate should be here as it is really good. - HYDRAflash

Um isn't this supposed to be about actual fnaf games...

SIster Location was on point. Shouldn't be on the list. - LilRose

It's a great game in my opinion! Story is good, Gameplay is fine. It brings new life to the franchise! Custom Night was good and challenging! Jumpscares were good but not better than FNAF 4.

It's good for what it is a spinoff of a game

This is number 1. Why is it kid freindly? the adventure robots are not accurate. springtrap is not even withered and it is horrible in general. this is number 1 by far hands down

Different, and playable without spooks

Why is this not on number one?