Not just any other tv/movie character plushies. Only plushies based on Nintendo characters. Here are the top 10 best nintendo plushies.
The Top Ten
Inkling Girl 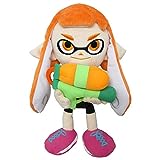 Its not that good. - TriggerTrashKid

This is one of the best plushies that is confirmed to Smash Bros for Switch. Kids love Inklings! - Neinwott

I love Zelda series. And I love Brawl. - Neinwott

It's one of the best plushies in ThinkGeek. - Neinwott

Yes, I would love if it had a nice hairstyle. - TriggerTrashKid

Even though, the greatest plushy of all, is Kirby. And one of the best Smash Bros Character is Kirby. - Neinwott

Smash 4 is one of the best Wii U game of all time. Even Bayonetta is powerful and badass! - Neinwott

Yoshi, once romanized as Yossy, is a fictional anthropomorphic dinosaur who appears in video games published by Nintendo. He is most known for his appearances in the Yoshi and Mario franchises.

Should be number one. Have thirteen colors of Yoshi plush. Yoshi is the best.

YOSHI IS THE BEST PLUSH EVER.

Official ones are cute
Fake ones UGLY

He is ugly as a plushie - TriggerTrashKid

Donkey Kong is the best character of SSB series. - Neinwott

The youngest of the seven original children of the Koopa King. Lemmy has always been fascinated by the circus and acrobatic acts and so he's made it his life's calling. Lemmy dreams of showing the world his incredible physical feats and never passes up a chance to gain a captive audience. Though he ...read more.

Respected opinion his plushie form is so cute, well official that is fake ones r so ugly

Bowser is the main antagonist of the Mario Bros. Franchise. From kidnapping Princess Peach to simply destroying a fun game between Mario and Friends in the Mario Party spinoff series, this king of the Koopas has set up a certain hatred towards himself amongst the large cast of Mario Characters. He first ...read more.
Jigglypuff

Jigglypuff, known in Japan as Purin, is a Pokémon species in Nintendo and Game Freak's Pokémon franchise.
Pichu

Pichu is an Electric type Baby Pokémon introduced in Gen. 2. It evolves into Pikachu. It is in the in undiscovered egg group, since it's a baby Pokémon. It is No. 172 in the Pokedex. It can be called a joke character in Super Smash Bros. Melee, because of its awful stats and weak moves. After its ...read more.
Eevee

Eevee, known in Japan as Eievui, is a Pokémon species in Nintendo and Game Freak's Pokémon franchise.
BAdd New Item