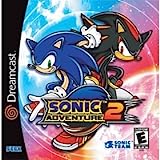 The reason this game is probably number 1 is because it contains the greatest sonic character: Shadow The Hedgehog

Hey person who did the first comment. NEVER JUDGE A BOOK BY IT'S COVER!

This is a very cool game, even though I've never played it before.

I don't know what the first person who commented was thinking...

Co-op is what makes this game awesome. - SunGoku

This game was great. I didn't realize that the graphics were ahead of it's time as amost Sonic games are considering this came out in 2006 which is impressive.
As far as the story line, it is my favorite of the series. I like a game that's mixed with comedy, drama, and tragedy which makes this game the second most memorable (maybe) after Sonic 3 and Knuckles storyline. I enjoyed the gameplay. Glitches did not come as often, only on certain spots, but I have witnessed glitches in some of the best games. Difficulty does not constitute bad game. I really wish that they could have or did not have to rush that way the game did not have to be overly hated by exaggeration. The level design, the music, the graphics, the movie cutscene made it one of the best games in the series to play. Besides, beating a game with glitches shows skill. I wish they would remaster ot finish producing this to it's full potential. I did not know until recently that it was a "reboot" for Sonic. I see why ...more

I'm sorry, but I have to disagree. Because of the confusing story line (which is also really long), Sonelise, the glitches, and the poorly animated cut scenes... I have to give this game a thumbs down. &;

HeavyDonkeyKong, what's so good about Sonic 06?! This game is balls, remember?!

This was my childhood game. I think it has the best theme song, Open Your Heart. It has really great music for each stage, and it mangaes to fit the mood of each level while still being catchy. I love the story. I love how each character gets their backstory, and I really love Knuckles backstory with his Echidnas. I love the gameplay, and the controls are nice. Pretty good graphics for its time too. Chaos is a pretty cool boss, though I feel a couple boss battles were lame (Chaos 4). Aside from bad camera angles, and sub-par voice acting (though I love Sonic and Eggman's voices), it's a very fun open world game to play, and transitioned Sonic from 2D to 3D nicely.

Though I do love sonic adventure 2, I dislike it’s forced character choice thing and how things were getting a little dumber for knuckles. This game was just the best. It reminded me of the original mega drive games in character, plus the worlds, music and story were well done. A classic game to me that I love replaying.

I don't have any of the other me games listed

My first Sonic game ever, I loved it and made me play the others after it

This game is epic! Definitely has a story-line in the Sonic game series! It has some back story on Shadow! Everyone needs to know what he went through!

It's a sonic Grand Theft Auto come on.

This is a spin off

What? This is a terrible game!

2 Sonics. Time travelling through some of the greatest levels ever (city escape). Enough said.

Combining nostalgia and defining what Sonic is capable in 3D, this game is the true star of the franchise!

Why does everyone like Sonic adventure 2.Sonic and knuckles was way better

1. Sonic the Hedgehog 3 (& Knuckles)
2. Knuckles' Chaotix (I might get some hate for Knuckles the Echidna and the Chaotix being my favorite Sonic characters because of how specially capable they are)
3. SegaSonic the Hedgehog
4. Sonic the Hedgehog 2 (16-bit)
5. Classic Sonic compilations (I am sorry to say that I, Kieran Glen Harris Stark am a Classic Sonic fanboy)
6. Sonic Triple Trouble
7. Sonic the Hedgehog (16-bit)
8. Dr. Robotnik's Mean Bean Machine
9. Super Smash Bros. (series)
10. Sonic Chaos
11. Sonic CD
12. Sonic the Hedgehog Pocket Adventure
13. Sega Superstars (yeah, I said it, haters of Super Monkey Ball and crossovers!)
14. Sonic Advance (trilogy)
15. Sonic Generations (CLASSIC SONIC AND MODERN SONIC ASPECTS INTERACT TOGETHER AND GO IN TIME?! YES!)

Why are people hating Blaze the Cat in favor of (Modern) Amy Rose, Cream the Rabbit and Modern Sally Acorn?! YOU CAN'T DISLIKE ANY CHARACTER FOR BEING VERY TOUGH, OPTIMISTIC, TOMBOYISH AND SPECIALLY CAPABLE IN FAVOR OF USELESS, PESSIMISTIC, SEXIST, DAINTY, ORDINARY, MEAN-SPIRITED CHARACTERS!

Also, Sonic Rush is an honorable mention on my list of best Sonic games! Like Donkey Kong: Jungle Climber, Pokemon: Black & White, Green Lantern: Rise of the Manhunters, the earliest Mario vs. Donkey Kong sequels, New Super Mario Bros., Tetris DS and the next Mario & Luigi: Superstar Saga sequels, Sonic Rush has stunning, industrious (in-game) graphics for the DS. Also, the soundtrack is catchy and reminds me of retro music. The story is epic and not heavily reliant on the friendship of Blaze & Cream and the gameplay (the most important aspect of the game) is a mix of Classic Sonic platforming and 3D! This game is so creative! I'd give it a 7/10.

The only Sonic game I could ever prefer over Knuckles' Chaotix is Sonic the Hedgehog 3 (& Knuckles).

17 Sonic and the Secret Rings

Along with Sonic Dash and Runners, this game is not a main series Sonic game.

But the iOS version is heavily underrated and went past my expectaition. Don't trust Gligar13Vids. He plays Sonic Jump like an amateur, the presentation is retro and deft for Modern Sonic standards.

24 Sonic and the Black Knight