Top 10 Sonic the Hedgehog Games with the Best Special Stages

One of the key aspects to the classic Sonic games (and some of the modern ones) are the special stages, where you play a certain challenge in an attempt to get one of the chaos emeralds (or various). Throughout the series these came in all different shapes and sizes, and some were better than others. Here are the 10 I consider the best.

Once again feel free to add any more that you like. If I didn't include any chances are I really didn't like them.
The Top Ten
1 Sonic 3 & Knuckles

Ah yes, the good old Blue Spheres special stages.
To access them you have to find a special ring hidden in the level, then you're on a 3D grid world and you have to get all the blue spheres whilst avoiding the red ones.
I'll admit I wasn't too good at these stages on my first go, but after a lot of practice I can now perfect them with ease. What I like is the element of tactics, how you have to plan out a route that will get the blue spheres whilst simultaneously not screwing yourself over in the process, and how much I like the music.
These special stages also have their own game, if you plug Sonic the Hedgehog in Sonic & Knuckles you can access Blue Spheres which contains hundreds to thousands of these challenges.
For those reasons I easily consider Blue Spheres to be the best special stages the Sonic series has ever seen (and probably ever will).

I suck at these, but it's a really fun and challenging experience!

I do not like you Sonic. You will never be as good as Mario.

I love these stages but I suck at them as well.

Very different from your usual special stages. To get to them you have to sail to a certain part of the sea map and find Johnny, after that you race him on the jet ski for the emerald. Given how much fun the jetski was to control with the DS stylus this was an enjoyable experience, and it becomes challenging not only dodging the obstacles but keeping your boost gague fueled and knowing when best to use it. I liked these stages (and this game) a lot.

The very first special stages. To access them you have to finish an act with 50 rings then jump into the giant ring at the goalpost.
These stages put you in a rotating maze you have to navigate and jump your way through to get the emerald whilst avoiding the goal spheres. These stages are a little tough at first, but after geting the layout down aren't too troublesome. I've got to the point now where I can usually get them all without failing. The idea behind them is unique and the stages have a very trippy feel to them. Also you only get a maximum of 10 chances to get all 6, so don't screw up too much.
Definitely a worthy challenge.

The music kind of makes the stages. Getting to the special stage is quite much more relaxing than some other special stages. It also is probably one of the easier and less frustrating special stages. Just got to pay attention and know what you're doing.

Heavilly influenced by the Sonic 1 special stages, and it requires the same way of entering them.
This time you actually get to rotate the level yourself to guide Sonic through. The catch is though you're on a time limit, and there are some ring gates where you need a certain number of rings to get through. It's challenging both to get through fast and collect rings, but satisfying once you can pull it off.
Despite the goal spheres and the time limit, your greatest hazard will be the bumpers, the damn bumpers ain't half violent. Hitting one can easily shoot you off course and lose control until you hit the goal sphere. It can make these stages occasionally frustrating, but at least you can have the option to retry them.

The most recent Sonic Special Stages have Sonic in a 3D world chasing a UFO for the chaos emerald. You have to collect blue spheres which build up your speed gauge and rings to keep the timer going. You lose if you run out of time or if you fall off course. You obviously want to build up speed as quickly as you can, but you also want to focus keeping the time going, it's about trying to find the nice middle ground. You may fall a few times but once you know how to take the sharp turns you're all set.
What do I think of these stages? Well I think they're some of the best the series has seen. They present an original concept, are challenging to the point where you want to keep coming back for more, they have a good risk-rewarding system and the music is nice and pulse pounding.

One of the more ambitious special stages to show what the 32X was capable of. Once again, 50 rings, giant ring goal, blah blah blah.
The stages contain 3D hexagonal tunnels where you have to collect blue spheres to advance onwards and rings for extra time. It's recommended to finish the stages with as many rings as possible to get more time for the special stage. They start out simple but as the layout gets more complex and sometimes disorienting it requires some tricky manouvers to survive, and it can be all too easy to fall off the stages.
You get plenty of chances to get all of the chaos rings, so just keep at it.

To access these special stages you have to find a special swing with Sonic, then hold the boost button until Sonic flys into the portal.
These stages also use the half-pipe, ring collecting objective that we've seen before, however here you use the DS stylus to control Sonic. Because of the added precision this is very intuitive and fun. The stages do get very difficult later though, so be warned. I've only ever beaten the seventh special stage once before.

Just like with Episode 1 these special stages used Sonic 2's as a blueprint. Just like before get 50 rings then jump in the giant ring at the goal.
It has sonic and Tails running in a half-pipe, collecting rings whilst avoiding hazards. What makes these stages more enjoyable is how the camera gives you a better field of view for anticipating rings, Tails AI doesn't screw you over as much, plus you can also control your speed with the push of a button. They emphisise speed well and are very enjoyable.
They're really nothing to worry about because just like with Episode 1 you can keep retrying them, so just perservere onwards and you will get the chaos emeralds. 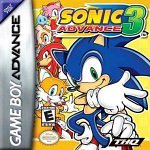 It's a bit more of an ordeal to enter these special stages. You have to find all 10 Chao in that world's levels, then collect the special key to access the special spring. It's easier than it sounds because once you find a Chao you keep it, and you don't have to find them all in one go like in Sonic Advance 2. Also the Chao chart gives you a better idea of where the remaining Chao are.
The special stages themselves involve the character riding on the Tornado and they have to move around and collect rings. Honestly getting to the special stages is more taxing than the stages themselves. It's not too hard to judge distance, and the stages allow for some (but not too much) error.
It can be quite a chore, but worth doing for Advance 3's awesome final boss.

More stages ambitious for their time. How to enter? Same as Sonic 1.
These stages have Sonic running in a 3D field where you have to destroy 6 UFOs before time runs out. Sounds simple, but these stages can be frustrating due to the slightly slow turning circle, the fact that the UFOs sometimes have sporadic movements, and worst of all THE WATER. The damn water. If you touch it your timer shoots down, which can be a serious hinderance to obtaining the time stones. You can destroy a time UFO that appears when you have 20 seconds left that gives you more time, but if you miss them you'll likely run out of time.
These stages do have good music and they are the best way to get the good ending, unless you want a lot of backtracking in the levels.

The Contenders
11 Sonic The Hedgehog 2

These are the special stages that have been most commonly re-used in Sonic games. To get to them you have to have 50 rings, hit a checkpoint, then jump into the stars to warp to them.
These stages have you in a half-pipe where you have to collect a certain number of rings whilst avoiding bombs.
Now I'll admit I don't really like these special stages. The ring quota required is often quite strict, the turns sometimes blindside you with bombs, and if you're playing with Tails his AI has a lag so he ends up running into bombs and losing your hard earned rings.
As frustrating as they are they were ambitious for the time to make a 3D perspective on a SEGA Megadrive game, plus this style was refined in later games.