Glade is one of the most popular candle brands of all time. They have a lot of candle fragrances. Some are popular, some are discontinued and some are limited edition.
The Top Ten
1 Delicate Vanilla Embrace

This is perhaps one of the best smelling Glade candles of all time. It smells very expensive and nice. It has a nice mix of women's perfume and a nice subtle vanilla fragrance. It doesn't smell cheap nor generic unlike most vanilla scented candles. Those candles can actually be found in a lot of stores and it shouldn't be that hard to find.

It's an amazing smell. It smells kind floral in the most delicate way. It smells like a nice perfume, kind of like a grandma, but also a perfume for young women. So good. It's a shame it's only a limited edition candle. This is one of the 4 "The Nutcracker and the Four Realms" candles. This is by far the best of the bunch. 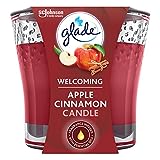 This one's a classic scent. It's hard to mess up the scent of apples and cinnamon in general. This one's great for the holidays, but it's fine to have this one at any time. 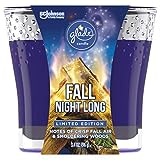 It's a pleasant fragrance of burning woods without being too overbearing. It's also a clean and natural fragrance. Although it's a candle for fall, but it smells a lot like Christmas and it's good for winter. This one's a limited edition candle so they may or may not come back in the future for the holidays. 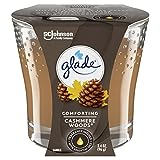 It smells quite nice. It's kind of sweet and woodsy. It's hard to tell what it smells like, but it's a welcoming fragrance as a whole. 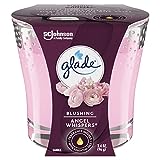 It may be one of the most feminine fragrances when it comes to Glade candles, but it's a very nice scent. It's very floral, delicate and perfumy to an extent.

If you're wondering what it smells like, it kinda smells like the Little Trees True North car freshener, but more subtle. It has a clean and somewhat soapy fragrance. It's sort of like an attempt to make a pine scent. But still, it smells good. This is also one of the "The Nutcracker and the Four Realms" candles. 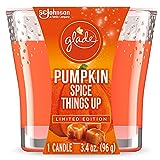 This one doesn't really smell like pumpkin spice that much, but it has a nice holiday fragrance. It has a very sweet scent like a good caramel fragrance. It's also a nice scent for winter. This one's a limited edition candle. 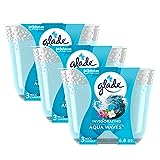 This one smells a bit nostalgic at first, but the more you smell it, the more it smells like the Little Joe car freshener Ocean Splash. Not bad at all. 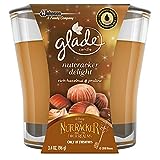 This one kinda smells like the candle "Pumpkin Spice Things Up" only nuttier. It has a decent nutty fragrance with touches of caramel. This is another of the "The Nutcracker and the Four Realms" candles. 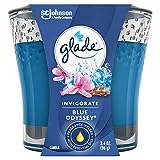 This one got discontinued a while ago. It's a shame because it wasn't even a bad scent. It smelled like a nice fresh and floral type of smell. Pretty subtle and pleasant as a whole. 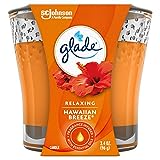 This one has been discontinued for years now. It's a shame since it has a nice fancy vanilla candle type of smell. It smells very welcoming and nostalgic. 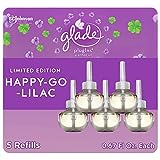