The mother of Youtube Poop. That's all that needs to be said. - GreninjaGuy 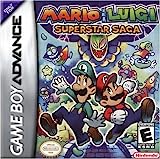 So many wacky things happen in this game. For starters, there is this sentient soda barrel that is worshipped as a god by a soda maker. The race of the main species is the Beanish race. There is a prince that plays tea party with his buff doll playmates with you at a place called Joke's End. Bowser loses his memory and becomes crime partners with a Bean Bean thief called Popple. Luigi can turn into a surfboard. Peach's voice is literally explosive. And everything thing that comes out of Fawful's mouth is crazy genius. I'd say more, but I would want you to be spoiled by the other weird things in this masterpiece. - GreninjaGuy

If you played this game, you know what I mean. - GreninjaGuy

Here's the plot. Mario and Peach go to an amusement park where the main attraction it a machine that crushes all your bones to form a ball and fires you out of a cannon. I'm not even kidding. - GreninjaGuy

Ever wanted to play board games with Mario? You probably didn't but this is the game for just that need. Though to be fair, this is the game where Charles Martinet makes his debut as the voice of Mario, so at least it has that going for it. - GreninjaGuy

Was it around the time when not everyone owned a computer?

The name says it all. - GreninjaGuy

7 Mario and Luigi: Bowser's Inside Story

Though way less weird than Superstar Saga, Bowser's Inside Story is just as weird. Fawful isn't just a side character, he's now the main antagonist. Because of this, he infects the toad race with a disease that makes them look like toads on devianart, causes bowser the ability to inhale everything he eats, and eventually gets Mario and Luigi stuck in his body where they spend most of their time in their journey. Though that's pretty much where the weirdness ends. There are other oddities I could tell you, but I don't want to spoil you this great game. - GreninjaGuy

A fat mario wannabe named Wario takes over your castle on an island named from you, and you have to gather six golden coins in a giant horror themed pumpkin, the insides of a whale, and even space to get back in your castle. - GreninjaGuy

Originally it's a game called Doki Doki Panic. It was changed to the sequel to the original Super Mario Bros. because the real sequel was "too hard for american gamers." - GreninjaGuy

Top 10 Weirdest Things to Witness in a Mario Game