Most Overrated Wii U Games

In honor of the Nintendo Switch hitting the shelves in a couple of weeks, here are the most overrated games from Nintendo's 8th gen console, the Wii U.
The Top Ten
1 Mario Kart 8

Dear Gosh, This Game Sucks From Very Beginning To Tear Drop End, And I'm A Huge Mario Fan, Look Before You Guys Get Mad At Me, I just Don't like this game, I just don't like it, sorry if you like the game, I will respect your opinion as long you respect mine

Is it illegal to hate this game!? Because every comment I see that says something against it has a reply saying stuff like "you're wrong, Mario Kart 8 is a good game" nothing against it, just pointing that out.

How is Mario Party 10 number one if almost no one like that game? And how is Bayonetta number 2 when people call it a Devil may cry ripoff when it takes a similar formula and do it better?

This game is the true definition of overrated with such an insane fanbase that goes crazy for everything and is overhyped, they complain a lot on how a character should be playable because he is important when the majority of the roster was based on make publicity to their games, during the Smash ballot they thought characters such as Dixie, Daisy or Crystal would've been just clones and better candidates were characters like Waluigi or Chrom, hot news, they were already in and Nintendo will never remove a thing from the original game so their votes were useless.

Ih also they ruined tons of fanbases as well.

I... actually love this game. The reason I'm voting is simply because the 3ds version is way better. Everybody acts like SSBF3DS is some sort of horrible game, but aside from the graphics, which aren't that important, Special Smash, which I never cared about, and Smash Tour, which I actually liked, but the 3ds' game mode was better, the 3ds version has it all! It's portable, has stages that aren't as huge as the Wii U's (The 3ds had more traditional Smash stages, the Wii u version was all like "WE HAS BETTER HARDWARE! 1! "), and -drum roll please- SMASH RUN! If you needed 1 good reason to get the 3ds version, or screw it, 1 good reason to get a 3ds, it would be this. It is probably the most addictive game mode ever.

I like this game, but can do without all the arguing, bullying, and shipping. Which only got worse when two characters who would have fit in much better in Playstation All-Stars Battle Royale if any game of that type (yes I know Bayonetta 2 was Wii U exclusive but the first game wasn't and 2 shouldn't have been Wii U exclusive anyway) ended up in there.

Actually, if anything I think those who bought the game then bought Bayonetta and/or Cloud just to beat up all the other or certain other characters (that actually, you know, CAME WITH THE GAME) are what made this overrated.

The graphics are standard for the Wii U, you still don't get the car item removed so you can move around the board, Princess Peach and Princess Daisy still have their overly excruciating, overly stereotypical princess dresses/voices and there is little innovation at most. I prefer Classic Mario over Modern Mario.

Actually, I am glad that none of you care. After all, voice acting does not make the game. Gameplay does. I just felt as if I had to give proof and detail.

My favorite was Mario party 7. I like the gamecube mario partys the absolute best. I haven't played this o e yet. Did they finally bring back eight player? Or no? Isn't the gamecube capable of that? Or no?

All games are overrated, the whole console sucks, listen to my words, the nintendo switch will be bad too,

Favorite game of all time
Loved it for motion controls. why? because I was good at them, and I understood the aiming system.
my only complaint is the final battle, I assume you went through a portal to get to Andross but the didn't explain that. It was weird and the boss fight was boring.
but I loved everything else about this game

This game is what I feared it would be. A decent but unremarkable clone of Star Fox 64. It's the 2010's. Do something new (other than a controller gimmick)

Yes, we were all hoping for a new, new Star Fox. When we heard of this, so much hypee! Oh wait, was anyone excited for this game? Because I wasn't.

Now that Nintendo has made their own Skylander / Disney Infinity / Lego Dimensions type toy game deal with "Starlink" I don't see this game being remembered that much...

Boy was this a disappointment. It was released at full-price in 2016 and it looks on par with an Xbox 360 game from 2008. Not only that but (unlike in Wind Waker HD) the gameplay wasn't changed much. The MIDI soundtrack is still there. The tears of light were 10% shorter, but the first 4 hours of the game is still really slow. Not much new content. It should've been $30 - not $60.

This game actually is overrated, it's because people thought this was zelda wii u (now known as breath of the wild), but instead we got this game to replace it

So uneccasary. Just play the original disc on the Wii U instead. It's cheaper. And gives you a more OG feel.

Do we really need remakes of original games? - The Ultimate Daredevil

Sure it is good but it repeats the same formula the three predecessors did and just added a few minor new elements.

While it's not a bad game and it's fun like most Mario games, it was not very innovative. It feels too much like the previous NSMB games, especially NSMB Wii.

Yeah I Agree, This Game Rules, but Is Overrated

It's just new super mario bros u but with luigi, seriously, who would pay 50 or 60 dollars for this game?

You can get this game WITH NSMBU! , this list...I'm dying as I read it more and more.

Probably my favorite NSMB game. It provides a great challenge.

How is Minecraft overrated when pretty much everyone seems to hate it? - IcetailofWishClan

I can't believe I forgot to put this, minecraft is so overrated - VideoGamefan5

All Minecraft is overrated

Actually, Nintendo and SEGA were sexist in Mario & Sonic at the Olympic Games, especially in the London one whereas if a character were a gender, every other teammate they have is no different gender. Girls' Story *cough cough*

They still decided that at least one female Mario character should not interact with a male Sonic character, eh? Either way, I don't like this game at all. We already have the real Olympics. What is the reason of no Super Mario/Sonic (platformer) crossovers?! >:(

Pretty much, nobody liked this game.

I'm pretty sure no one likes this.

Honorable Mention: Paper Mario: The Thousand Year Door (A for the story, A- for the presentation and A+ for the gameplay, 9/10 overall)

I'm I the only one (plus my friend) who like they game. The formula is the same, get the 6 big paint stars by getting the mini paint stars, same with sticker star but with stickers. But this game is awesome and it has some humour so just be quiet you guys, please.

Literally this list shows how underrated the Wii U itself is because even only focusing on the Wii U, most of these games listed are very underrated or hated by everyone. Seriously.

This list got FEATURED? Why? Anyways, VGF5 who doesn't like RPGs, has the guts to be biased and say that this game is boring. Well...you hate RPGs, so don't say this is overrated. Almost all of VGF5's lists are him complaining about stuff and it REALLY drains me.

I honestly don't see how this game wasn't made sooner. The combat idea behind it was so obvious.

This game is amazing why is it in the list?!

Meh, Nice Graphics But The Game Lacks a lot

I hate it because it didn't have Candy Kong

It sucked compared to NSMB you can't even get powers its just lame monkeys with times events. Generic, boring. NEXT.

Everyone acts as if this entire series was the first ever to have a female protagonist that wasn't one that wasn't a choice among males (e.g. Chun-Li in "Street Fighter" or Zoey in "Left 4 Dead"), was obviously a woman from the start (unlike Samus in the original "Metroid" though by now her gender is common knowledge), and this wasn't because it was a tie-in game for a movie or whatever that already had a female protagonist (e.g. "Alien Triolgy" or any "Sailor Moon" game). It's not. Even looking past the main character's gender, there's really nothing all that special or groundbreaking here, just a rip-off of "Devil May Cry".

Look, I tried, I really did, but I just can't see what everyone else sees in this game other than (whether due for perverted reasons or misguided feminism) the title character herself.

In a world where "South Park" has been around for twenty years now, why is over-the-top crap like this still worshiped and seen as "groundbreaking"?

Only edgelords, pervs, and short-sighted feminists ("yay female protagonist without romantic subplot and yay female character designer) like this

Definitely doesn't deserve the hype it got. All graphics, no gameplay. - Entranced98

Umm, who would want a tennis game? The only time people watch tennis is at the Olympics. - TristGamer

This game is borderline shovel-ware, most lacking game in the series. You can tell it was rushed by Nintendo. - Lovealott

15 The Legend of Zelda: Breath of the Wild
16 Splatoon

Awesome game, but people are going crazy over it, and the fanart is just as bad as the zootopia fanart - VideoGamefan5

ABSOLUTELY NOT! This game was great!

This is a wii game, and what do you expect? Of course its bad. It's MODERN NICKELODEON!

Did you mean to put SpongeBob Heropants on this list? Even Disney Channel is better than Nickelodeon. I heve these reasons such as catfights.

How can a game that's universally hated to the point where only 1% of the world (Raises hand) will think it's great and defend it? Admit it, you only put it here just so people can bash on it more, as if it isn't hammered in my skull enough. I got over my fear of Sonic 06 and don't talk about it often anymore. Am I the only normal Sonic fan?!

Every single animal crossing fan hates this game and everyone hated it even before it came out. - Rue

Overrated because of all the amiibos surrounded over it, I keep on seeing the animal crossing amiibos in the clearance section, so yeah no one likes this - VideoGamefan5

Overrated on every console that runs it

There's really not much you can do with most of the characters, and what you ARE able to do with them wears thin fast.

This Isn't Overrated, it deserves the Praise it got, it's the best wii u game ever - VideoGamefan5 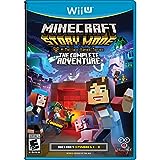 It's Minecraft, Need I Say Anything? - VideoGamefan5

Just about anything Minecraft is overrated.