Regardless of whether you're going hunting, camping, hiking, or just exploring the urban environment, a good pocket knife can mean the difference between an adventure and an epic.

A good foldable pocket knife should cover a few basic criteria:
Is it of a good quality steel
Is it compact enough to actually fit in a pocket
Is it safe to carry around without opening
Will it last you longer than the clothes you carry it in
If you can answer "yes" to each of these questions then you're on the right track to finding a good quality knife.

Not every knife needs to be heirloom quality which is why many folding knives are in the budget-friendly category. Also, since I consider knives different than the combination multi-tools on the market (Leatherman, etc.) I'll keep to simple, more simply constructed knives. 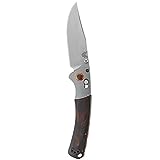 While a bit pricey at around $200, this little guy is American made, features a wood handle, and is made from CPM-S30V stainless steel which means it is relatively easy to sharpen but still holds an edge thru the toughest of uses. It also is incredibly pretty to look at. - Finch

Incredibly inexpensive, but not cheap in quality, this knife is tiny and fits almost anywhere. It features a drop-point style blade which means you can pierce or slice without any trouble. It's also got a pretty wide blade which means it's sturdy and won't break under tension. - Finch

Lightweight and versatile, the SOG blade has textured grips so it won't slip out of your hands. The blade is also incredibly fast and easy to open so it'll be ready in a pinch when you need it. - Finch

With a blade less than 3 inches, this knife can be carried on your person on an airplane. It's strong, sharp, and isn't noticeable when in your hand or pocket. - Finch

This tiny blade (weighs just 2 ounces) is made fully from stainless steel so even though it's small, you can put it thru a ton of abuse. You can even get it with a serrated edge. - Finch

With a half serrated edge and half smooth edge, this little knife can cut thru about anything. Small enough to carry in your pocket or backpack but big enough to feel comfortable in your hand. - Finch

Small and compact, this inexpensive knife will work great on the trail and on the streets. - Finch

With a tactical design and high quality steel this knife is lightweight and cool looking. - Finch

A steel blade and aluminum handle make this knife a great combination of strength and weight. It also has a reversible pocket clip so you can wear it tip up or down. - Finch

This thing was pretty sick, it was cheap for an anniversary edition too. I used it only once or twice and it cut great. I had two, my dad lost one and my other is still in the box. mine got a little rusty, a Little<, but that's because it was in my super humid garage

With a modified Tanto style blade, you can put this knife thru the paces without breaking or chipping it. There are also notches in the blade for bending wire and a hex hole in the hilt for additional use. - Finch

I don't think it has a specific, but it's super tough, SUPER light, and pretty small. the best bang 4 your buck